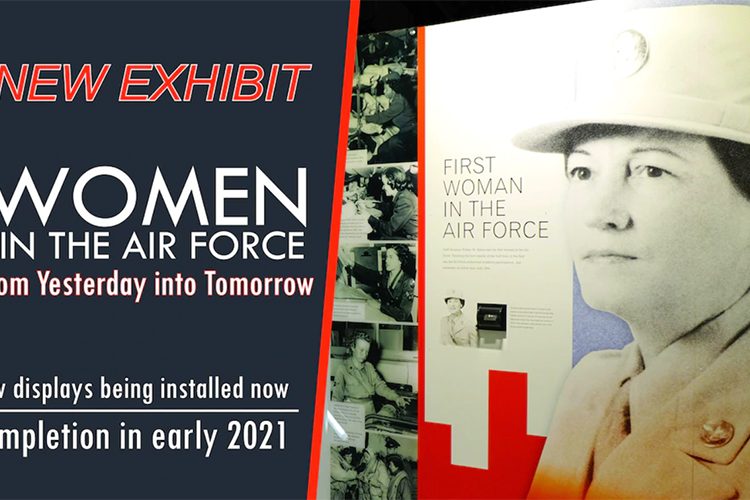 MUSEUM TO OPEN NEW EXHIBIT ON WOMEN IN THE AIR FORCE

The National Museum of the U.S. Air Force is opening a new exhibit in commemoration of the 100th anniversary of the 19th amendment extending voting rights to women.

“Women in the Air Force: From Yesterday into Tomorrow” will highlight achievements in women’s civilian and military careers including historical issues, changes in laws and attitudes, and women’s contributions to the Air Force mission.

The exhibit is currently being installed in several galleries across the museum, and will be complete in early 2021. The displays will contain artifacts used by women in the Air Force from many different eras, according to the museum.

“This exhibit will feature over 60 artifacts that have never been seen on public display before, including space flown objects, unique uniform items, and even a concrete duck sculpture,” said museum curator Krista Dunkman. “What I love about these artifacts is that in addition to showcasing the accomplishments of these women, they also speak to who they were as people and their immense dedication to serving the U.S. Air Force despite many challenges.”

Museum curator Jennifer Blankinship added, “Courageous women have broken barriers in all walks of life and those in the Air Force are certainly no different. It has always been important for us to tell the story of what women in the Air Force have accomplished, and it is my hope that this exhibit will inspire future generations to pursue their goals regardless of how difficult it might seem.”

By the end of Oct, museum staff will complete the installation of the display in the Cold War Gallery, which illuminates the numerous policy changes required to create a more equal environment for women to serve alongside their male colleagues, including new regulations on maternity.

Designing an exhibit of this magnitude was certainly a challenge said museum design specialist Luke Maynard, who led the team in designing the exhibit.

“This exhibit is unlike any other because the size and scope is so large with various elements throughout the museum, but it is also unique because the materials we chose and the colors we selected are highly symbolic,” said Maynard. “A good example can be seen in the Significant Women Silhouette display, which contains steel plating representing the tough walls these women had to break through and the doors that are now open for others to follow, and even the sunset/sunrise orange font, which signifies that the sun is setting on an old way of thinking and rising anew.”