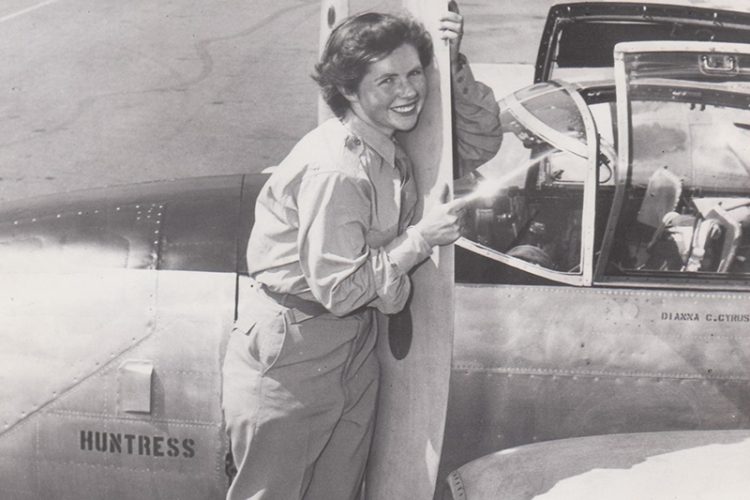 Ten years before Joan Merriam Smith and Jerrie Mock successfully completed their solo flights around the world, Dianna Converse Cyrus Bixby planned to become the first woman to complete an official solo flight around the globe.

While there were at least two women who had completed solo flights around the world prior to 1954, neither flight was considered official. For example, both Mary Petre Bruce and Elly Beinhorn flew around the world in 1930 and 1931, respectively. In both cases, their planes had to be shipped across the Atlantic and Pacific Oceans.

Dianna was an accomplished pilot with some 5,000 hours of flight time accumulated by age 31. In 1954, she flew produce 3-4 times per week in-between the United States and Mexico. She also flew passengers around the western half of the United States for the U.S. Forest Service. She flew DC-3s for the movie industry, accumulating some 4,000 hours alone as a DC-3 (camera) pilot.

Standing at just 5 foot 2, Dianna’s personality was described as spunky; she was referred to as a “pretty pixie” with an infectious smile. As a child she rode horses bare back in the circus, accumulating a room full of trophies earned through horsemanship. She studied soprano singing and acted in Santa Barbara, California-based theater groups, and she also played violin.

In 1950, Dianna and her husband Robert attempted a world flight, but their right engine blew a gasket near Calcutta. Due to the need for major repairs, they were unable to continue. Robert next agreed to let her make the attempt by herself since no one else had yet completed the record. However, it would take them some time to raise the money. The cost of such a flight to Dianna (minus sponsorships, presumably) was estimated to be around $17,000 for fuel plus a $2,500 fee to the aeronautical association, or $190,000 in 2021 dollars. In the early 1950’s, she underwent specialized high altitude training at Lockheed Aviation in Burbank, CA.

Dianna worked long and hard hours in preparation for her world flight attempts. Together with her husband, she ran a business transporting produce known as Bixby’s Airborne Products. A normal day for Dianna would begin at 5 am. After leaving her children in the care of a nurse, she would set off for flying until at least 4:30 p.m. She is quoted as saying: “In aviation, you’re either in it 24 hours a day or not at all.”