Stick & Rudder: February’s Member Gathering – Saturday, February 27 at 10:00 AM
Join us Saturday for an interesting presentation by Chuck Tippett discussing his enormous fun time flying a Stearman from Virginia to Seattle and back.

The following is Reprinted courtesy of Cooperative Living magazine. 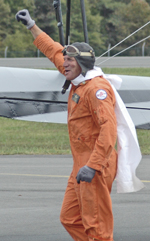 Charles S. “Chuck” Tippett Jr. likes the view from above.

Charles S. “Chuck” Tippett Jr. likes the view from above. As a Rappahannock Electric Cooperative lineman, he spends much of his time “walking the wood” — shop-speak for climbing utility poles — and working 35 feet in the air. On his off time, he’s likely to be at 3,500 feet, in the open cockpit of a Stearman biplane, or nimbly negotiating the wing of that same aircraft, as one of only 11 practicing wing walkers in the country.

His love of aviation dates to his childhood. “I always loved the idea of flight,” says Tippett. “As a child I used to daydream about riding my bicycle and taking off into the air.” But the reality of flight always seemed beyond his reach. “I figured only wealthy folks could afford to fly,” he adds.

That mindset changed one day in 1985 when Tippett heard a buzzing noise, looked up and saw an ultralight aircraft fly over his front yard. He was struck. “I thought, ‘I could do that.’ It looked fun and cheap. I closed my eyes and again saw myself as a kid on my bicycle with wings.” A year later, Tippett read a brief story in Rural Living (Cooperative Living’s predecessor) about a Southern Maryland Electric Cooperative lineman named Kenny Haden, who was an ultralight aircraft enthusiast. The same issue of Rural Living included a classified advertisement offering an ultralight for sale.

The idea of learning to fly blossomed in his mind. He talked it over with his wife, Vicki, who told him he should pursue his dream. It would mean having to sell his motorcycle, which to that point in his life had been his main diversion. So, Tippett took the plunge. He bought the ultralight advertised in the electric cooperative magazine and the rest, as they say, is history.

“I bought a book written by Dennis Pagen, one of the forefathers of ultralight aircraft flight, and taught myself how to fly the ultralight,” he notes. “That’s really not the ideal way to do it, but it’s what I did, because at the time there were not too many two-seat ultralights, the kind that someone would teach you with, anywhere in the country.”

Tippett taught himself in what he calls “baby steps.” First came the ground work — he practiced steering the ultralight around the grass airstrip, then practiced taxiing down the runway. Next, he picked up speed and approached takeoff velocity while taxiing down the runway. Then Tippett made runs down the airstrip, lifting only the ultralight’s nose wheel off the ground. Next, he made short “hops” into the air as he hurtled down the air strip. Then came the moment when he lifted off and climbed into the air for a sustained excursion into the ether.

It was love at first flight.
Within three years, Tippett was making extended, cross-country flights with his ultralight. “I flew from Virginia to the Finger Lakes region of New York in 1989,” he notes. “It took three days, and on the way, I flew around the Statue of Liberty. My wife, with my two sons in diapers, was my ground crew, carrying supplies in the car.” Because of the ultralight’s limited range on a single load of fuel, Tippett had to stop every 60 miles or so. “Vicki would usually get to the next stop before I would, because an ultralight aircraft travels so slowly.”

The next step in Tippett’s wild blue odyssey was to obtain his private pilot’s license, which he did in the autumn of 1990. Soon thereafter, he began work on building his first airplane. It was an experimental class plane, and he finished it in 1994. “I bought my first antique class aircraft, a 1940s-era Piper Cub, in 1999,” Tippett continues. Throughout this time of building and acquiring aircraft, Tippett continued to fly his ultralight and experimental planes. And as his experience expanded, so grew his passion for aviation.

Passion may seem a bit overstated, but it’s how Tippett defines his aviation motivation. And the foundation of that passion is a deep-rooted admiration for the founding figures of modern aviation, people like Roscoe Turner, Amelia Earhart, Charles Lindbergh and Vincent “Squeek” Burnett.

So, it was only natural that, in 2002, Tippett began working with the Flying Circus air show at the Bealeton aerodrome, just off Route 17 in Fauquier County. The circus, which marked its 38th season in 2009, features air shows and aviation exhibitions starting at 2:30 p.m. every Sunday, May through October. It is a celebration of the time in U.S. history when aviation was young and traveling air shows featured barnstorming wing walkers and aerobatic daredevils performing feats of derring-do. Like those early air shows, the Flying Circus offers open cockpit rides as well as aerobatic feats for a small fee.

“You have to train for a year; then you get out and walk the wing,”…

The following fall, Tippett did his first Flying Circus wing walk. “You have to train for a year; then you get out and walk the wing,” he notes. “A wing-walker has to earn the trust of the plane’s pilot, and the pilot has to earn the wing-walker’s trust,” notes Tippett. “During that year of training, you and the pilot are building a bond of mutual trust. If you make a mistake (while wing-walking), it can cause the plane to crash. There’s absolutely no margin of error, just like being a lineman.”

In the U.S., there are currently 11 wing-walkers, and four of them operate out of the Flying Circus at Bealeton. Unlike European wing-walkers, those in the U.S. traverse the airfoil untethered. In addition to wing-walking duties, Tippett is also one of the pilots who performs in the show, flying in formation, dog-fighting and popping helium balloons, and dropping “flour bombs” on an “evil” character, the dastardly Black Baron. Asked what it’s like to climb out of the Stearman’s cockpit and venture out to the end of the biplane’s wingspan, Tippett says, “It’s like what I imagined it would be like to take a magic-carpet ride, when I was a kid.” He also likens it to standing up in the bed of a pickup truck hurtling down the road at 100 miles per hour.

As you might imagine, it takes pretty good physical condition to practice wing-walking, especially coming back up from the below-wing segment. “It’s like doing a sit-up from a hanging-down position into a hundred-mile-an-hour wind,” he notes. “I’m not a thrill-seeker,” Tippett adds. “I don’t even like roller coasters.” But he’s very passionate about flying and aviation; and in particular, he enjoys paying homage to the pilots who barnstormed across the American consciousness in the early days of U.S. aviation.

Today, he owns several aircraft, including two ultralight aircraft and an experimental class plane. In all, his aircraft are spread out across three separate airfields. Tippett has flown his home-built airplane to Alaska and back. And every winter, he loads up his aircraft, puts snow-skis on the plane and flies to northern Maine.

In addition to working as a Rappahannock Electric Cooperative area serviceman, flying for fun, and performing the Flying Circus, Tippett is also a certified flight instructor. He has students ranging from the 13-year-old son of one of his fellow Flying Circus pilots, to a 70-year-old man who just decided he wanted to learn to fly. “It’s never too late to learn,” says Tippett.

Passing the Bug
When asked about why he does what he does for fun, Tippett answers, “I love flying, and I’m very passionate about the antique airplanes and the era of U.S. aviation that they represent. I feel blessed that the Flying Circus is a place, right here in Fauquier County, where we can in a small way promote aviation and preserve the barnstorming heritage. “And,” he continues, “I can give something back. I can teach folks to fly who might otherwise have difficulty getting that opportunity. Many times, after the show I’ll see a youngster leaning on the fence, face filled with awe, as we’re winding down ‘hopping’ the paid rides. I’ll take time to chat with them and if they’re interested, I always say, ‘let’s go flying.’”