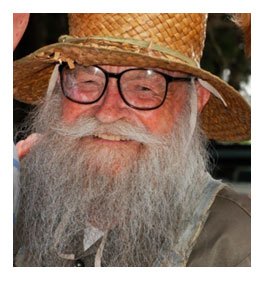 Life began for Charlie Kulp in Stafford, VA on September 20, 1925. It didn’t take long for him to follow his dream in the field of aviation. In 1942, at age 16, he became an apprentice mechanic at V.P.I. Airport in Blacksburg, VA and began flight lessons at Woodrum field in Roanoke, VA. He entered the Navy as an Aircraft Mechanic, got his private pilot’s license in San Diego in 1946. After his Navy career, he spent the next 25 years or so working at, and managing, various airports and continuing his Aircraft Mechanic education. In 1952 he became a Private Pilot Examiner. There is no telling exactly how many pilots he inspired and trained to fly in his career.

He and his first wife, Joan, became instrumental in joining others to help found the Flying Circus Aerodrome in the early 70’s. In 1973 he began his famous Flying Farmer airshow routine, which took him all over the world, including his return to England to perform three times for Royalty in the late 80’s and early 90’s. As of 2004 he had flown over 800 performances, in NY, NJ, PA, WV, OH, MO, MD, VA, NC, SC, IL, OK, TX, GA, FL, LA, Canada and England. He retired the “Farmer” in October, 2007 at the age of 82.

It is only fitting that we say our “see you later” at the Flying Circus in Bealeton, VA, where he flew his last plane on his 96th birthday. Join his daughter Joanna and Evelyn Marshall and family in sharing stories about the man and his impact on aviation and countless lives on September 17, 2022 at the picnic pavilion from 11:00a.m.until about 4:00p.m. The stories could run on longer, so we have some flexibility on the end time. Bring a picnic lunch and a chair. Spread the word to those who might be interested.

An RSVP would be nice, but not required, sent to flyingfarmer1022@gmail.com just to get an idea of the number to expect.
Thanks, Joanna Kulp