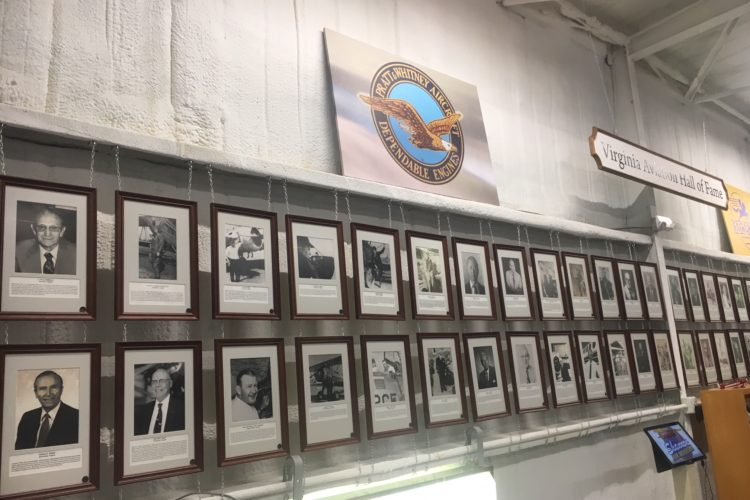 Distinguished Virginians Col. Floyd Callihan, Capt. John Corradi and Steve Hoffman have made invaluable contributions to Virginia aviation, the industry and its history

With over 65 years in the aviation industry, Callihan was one of the foundational leaders of the Virginia Civil Air Patrol, personally leading the planning, construction and full-time operation of the CAP Virginia Wing headquarters building and hangar complex at the Richmond Executive-Chesterfield County Airport. As an aviation history enthusiast, he has collected and also contributed numerous artifacts to VAHS and the former Virginia Aviation Museum, the collection of which now is at the Shannon Air Museum in Fredericksurg. He lives in Goochland County.

Corradi relocated to Rixeyville in 1975 when United Airlines moved his base to Dulles International Airport. Two years later, he began operating his own airfield, Pleasantdale Field, on his farm’s property. Since then, Pleasantdale has welcomed many aviators, including ultralight pilots. In 1999, Corradi began participating at the famous Flying Circus Aerodrome & Airshow at Bealton, where he still volunteers and sits on its board of directors. He also was instrumental in organizing and planning the first Culpeper Air Fest. His generosity is well known, even giving people rides for expressing an interest in aviation. A historian, he also served as a docent at the Smithsonian’s National Air & Space Museum Udvar-Hazy Center in Dulles and has published numerous articles about vintage aircraft.

Hoffmann has a storied aviation industry career in Virginia, beginning with designing the décor of the Holiday Inn Aerodrome Restaurant at Richmond International Airport, to his participation in The Flying Circus in Bealeton, to founding, owning and operating Barnstormers Airshows, which brought world class talent to perform nightly at Kings Dominion. That unique show attracted thousands of aviation enthusiasts, as well as inspiring thousands more general interest spectators who became aviation fans. Later, he founded Eagle Balloons, which manufactured Type Certificated hot air balloons at Hanover County Municipal Airport. He has retired to Lake Worth, Fla.

The Virginia Aviation Hall of Fame Induction Banquet is on Saturday, October 19 at the Fredericksburg Hospitality House Hotel & Conference Center, 2801 Plank Road. A reception begins at 5:30. Dinner starts 6:30. Tickets can be purchased by calling 540.376.3265 or by e-mailing vahsonline@gmail.com.

The Virginia Aviation Hall of Fame was founded and is maintained by the Virginia Aeronautical Historical Society, both founded in 1978. The VAHS and hall of fame are headquartered at Shannon Airport in Fredericksburg. Among the many distinguished members of the Virginia Aviation Hall of Fame are Hampton native and Virginia Tech alumnus Dr. Christopher Kraft, the architect of NASA’s Mission Control operations and its Manned Space Flight Center, which guided America’s first astronauts and the moon landing missions of the 1960s; and “Hidden Figure” Katherine Johnson, also of Hampton, who was responsible for many of the orbital and space flight trajectory computations for NASA’s first manned spaceflights before the use of computers, as well as playing key roles in the Apollo 11 and 13 missions.

The VAHS is dedicated to the preservation of Virginia’s aerospace history and significant contributions to America’s aerospace preeminence, from North America’s first hot air balloon launch to rocket launches from Wallop’s Island. It founded the Virginia Aviation Museum in 1986 before donating it to the Commonwealth of Virginia, then saved its collection in the face of the VAM’s closing by the Science Museum of Virginia in June 2016.