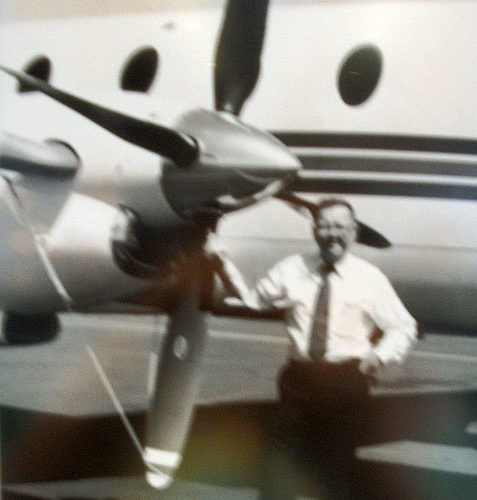 Inducted in 1980, Charles J. Colgan, State Senator from Manassas, VA, is recognized for his outstanding support of aviation legislation in the Virginia General Assembly. A WWII veteran, he served in the Army as an aviation mechanic and earned his pilot’s license in 1953. In 1965 he founded Colgan Airways, which operates a commuter airline, flight school and aircraft maintenance shop. 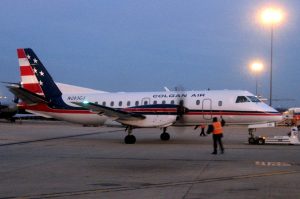 Upon his graduation from high school Colgan enlisted in the U.S. Army Air Corps and was called to active duty in February 1945. After graduation from basic training Colgan was stationed in Italy as part of a maintenance flight crew on a C-47. After completing his military service Colgan returned to Maryland where he met and married his wife Agnes. In 1948, Colgan and his wife moved to Washington, D.C. He trained as an airplane mechanic working for Capital Airlines and then obtained his commercial pilots license.

After flying as a corporate pilot, Colgan moved to Manassas, Virginia in 1964 and formed Colgan Air operating as a flight school and fixed-base operation. In 1968, Colgan expanded his business to include a regional airline which he sold to Presidential Airways in 1986. After the bankruptcy of Presidential, around 1991, Senator Colgan and his son Mike restarted air service under the new name Colgan Air with one aircraft. Colgan and his family sold the airline in 2007 to Pinnacle Airlines.

At the time of the sale, Colgan Air had grown from a few employees and one aircraft to 1,100 employees, 50 aircraft, and 350 flights daily to 53 cities in the North East and Texas. 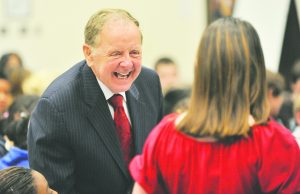 Mr. Colgan speaks with a student at Gainesville Middle School in 2009. (Tracy A. Woodward/The Washington Post)

Charles J. Colgan, an aviator and businessman who became the longest-serving member of the Virginia Senate, where he was known for his advocacy of the development of Prince William County and for his steady-handed stewardship of state finances, died Jan. 3, 2017 at a hospice center in Aldie, Va. He was 90.

“Chuck was a champion in the Virginia Senate for the people of Prince William County and the entire Commonwealth,” Virginia Gov. Terry McAuliffe (D) said in a statement. “His passionate and bipartisan approach to getting things done should serve as an example for all of us as we continue the work he and so many undertook and passed forward to us.”

Mr. Colgan, a Democrat, was elected to the Virginia Senate in 1975 and represented fast-growing areas including Manassas and Manassas Park, in addition to parts of Prince William County. As the founder of Colgan Air, a regional commuter airline based in Manassas, he jokingly claimed the distinction of being the general assembly’s sole licensed airplane mechanic.

Until his retirement in 2015 at age 89, he held his seat throughout population shifts and redistricting, drawing the support of Republican voters as well as Democrats with his moderate and, at times, maverick voting record. In Richmond, where he served as Senate president pro tempore and in the influential role of budget conferee, he was widely known for his collegiality and pragmatism.

He “was really a landmark figure, not just in Prince William County, but in the entire commonwealth,” said Stephen J. Farnsworth, a political-science professor at the University of Mary Washington. “He’s a reminder of a more gentle and centrist era of Virginia politics, when Richmond was proud of the fact that it did not have Washington-style gridlock.”

“It never bothered us that we represented different parties, if we were working for the same goals,” said John C. Watkins of Powhatan, a Republican who also retired in 2015 after decades in the Virginia legislature. “That’s the way he saw fit to make it work.”

Mr. Colgan co-chaired the Senate Finance Committee and counted among his achievements the “sound financial management of Virginia,” Farnsworth said.

He took particular interest in the economic and educational development of Prince William County and the surrounding area. He was credited with bringing Northern Virginia Community College campuses to Manassas and Woodbridge as well as helping lead the establishment of George Mason University’s location in Manassas.

“He was one of the people who put George Mason on the map,” said Senate Minority Leader Richard L. Saslaw (D-Fairfax). “That whole community, Prince William County, is where it is today because of Chuck Colgan.”

Outside of education, Mr. Colgan devoted much of his legislative efforts to transportation, an issue of extreme concern to residents of his region who commute to and from Washington. He sought funding for the Virginia Railway Express and was credited with prevailing on state officials to widen a segment of I-66 west of Manassas, among other projects.

As a legislator, he was “low-key and soft-spoken, which may be one of the reasons he was so well-liked and successful,” said Larry J. Sabato, the director of the Center for Politics at the University of Virginia. “He wasn’t wont to call press conferences or get up on the soapbox. When he spoke, people really did listen.”

He was considered a reliable Democratic vote, but, as a Catholic, he opposed abortion rights and voted with Republicans on that issue. To avoid a government shutdown, he supported Republicans in a highly fraught budget debate in 2012, voting for an $85 billion budget package despite its exclusion of a $300 million appropriation for the expansion of Metrorail to Dulles Airport.

“We can’t just be concerned about Dulles,” he told The Washington Post at the time. “You can’t worry about this project and not the rest of the budget.” As for Democrats angered by his vote, he quipped, “They’ve been mad at me before.”

Charles Joseph Colgan was born in Frostburg, Md., on Sept. 25, 1926. When he was 5, his mother died of complications from a miscarriage. Shortly thereafter, his father died of pneumonia. Mr. Colgan spent the rest of his upbringing with his maternal grandparents on a farm in Grantsville, Md.

Mr. Colgan joined the Army Air Forces at the end of World War II, serving in Italy as an airplane mechanic. He later became a pilot and settled in Virginia.

In 1965, he joined other investors in founding a flight school and vendor of aircraft and fuel. The company, which he sold and reformed, grew into Colgan Air, a multimillion-dollar family business that provided commuter flights for airlines including Continental and US Airways. The outfit included dozens of planes by the time it was sold in 2007 to Pinnacle Airlines.

Mr. Colgan launched his political career when he joined the Prince William Board of County Supervisors in 1972, representing Gainesville. He served as board chairman before moving to the Virginia Senate.

A high school named in his honor opened in the Manassas area of Prince William County in 2016.