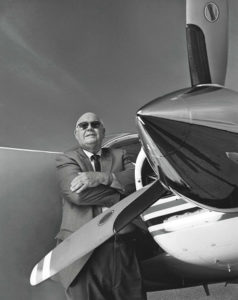 Ed Boyer is the founder, CEO and president of Mercy Medical Airlift, located in Virginia Beach, Va. MMA is a nationwide network of programs that include Angel Flight Mid-Atlantic, Angel Flight of Virginia, the National Patient Travel Center, Mercy Medical Airlift, the Homeland Security Emergency Air Transportation System (HSEATS), Air Compassion America, and Air Compassion for Veterans. These programs help thousands of patients every year to access life-saving or life-improving specialized medical care that would otherwise not be available to them due to barriers of distance, time and finances. In Virginia alone during the 2008 calendar year, 322 Commonwealth pilots completed 273 Angel Flight missions, with a public benefit of $214,461.

Mr. Boyer helped create Air Charity Network, formerly known as Angel Flight America, whose over 7,500 pilots and their regional organizations are bound by common training requirements and protocols necessary for safety, cooperation and quality of service. Mr. Boyer developed a homeland security component of his organization, known as HSEATS, that mobilized volunteer pilots and utilized corporate planes during Hurricane Katrina to aid in disaster relief by performing over 2,600 missions. An engineer, private pilot and former federal senior officer with the Department of Health and Human Services, his visionary insight has led him to foster partnerships with dozens of organizations in the fields of health care, government services, commercial and corporate aviation, disaster relief, and charitable lodging.

His commitment to help in the healing of military veterans and active duty service members and families led to the creation of Air Compassion for Veterans, which provided over 3,634 free flights for veterans and families affected by deployment in Iraq and Afghanistan in 2008. He has been a pilot for 47 years with commercial, instrument, single and multi-engine and glider ratings, and served on two FAA advisory committees.

Ed Boyer, Pilot With a Mission
by Joe Treen,

The first time someone asked Ed Boyer if he could take a patient with a rare disease to a specialized hospital in the tiny, single-engine plane owned by his Virginia flying club, he thought nothing of it. Nor did he think much of it the second time. Nor the third. It was only after flying several patients—often children whose families could not afford a regular flight—that he began to see a need. So in 1972, Boyer founded Mercy Medical Airlift, the nation’s first medical-air-transportation charity. In the 35 years since, he has overseen the development of a well-organized national network of airlift services—the Air Charity Network—that flew more than 25,000 patients in 2007 alone. “Typically there is all kinds of money for medical research but not a dime to help people get there,” says Boyer, 70, who took early retirement in 1992 to work full-time on the venture. Today more than 7,500 volunteer pilots have signed on; recently Mercy Medical Airlift began programs to help evacuees in the wake of national emergencies, and to transport military families affected by deployment to Iraq and Afghanistan. As for Boyer, he stopped flying patients to devote himself to the larger picture. “I realized this wasn’t going to become a national system with me flying them one at a time,” he says. “Somebody had to put the thing together.”