WWII pilot Howard Snyder’s tale of being “Shot Down” over Belgium, told by his son, highlights heroism of the “Greatest Generation”
By Stephen Lee stephen.lee@capjournal.com Nov 13, 2017 Updated Sep 24, 2019 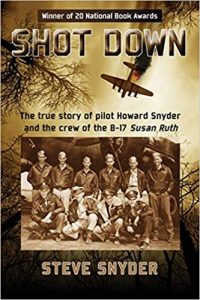 Shot Down: The true story of pilot Howard Snyder and the crew of the B-17 Susan Ruth

Howard Snyder piloted a B-17 Flying Fortress long-range bomber that was shot down over the Belgium/France border in February 1944 on a mission to hit Frankfurt, Germany.

He helped get a couple of his nine crewmen out, saw others get out, then he bailed. He fell from 20,000 feet, not pulling the ripcord until he could see objects clearly on the ground…

“It seemed natural to wonder if the chute would open. I knew soon enough, as the air caught, filled the chute and the jerk nearly snapped off my head,” he wrote in a diary only days afterward. “The rushing air roaring in my ears stopped suddenly and a most wonderful and peaceful quiet settled over me. It seemed as if I had come out of that hell above into a heaven of peace and rest. . . I was too close to the ground to pilot my course. I placed my feet together and resignedly watched the trees rush up at me.”

It was not so peaceful on the ground. He had fallen into a world where Nazi soldiers were searching for him and his crew while brave Belgian and French farm families risked their lives to find them, hide them and help them escape.

Snyder spent a little time in South Dakota as a child.

There’s a photo of him as a baby in the arms of his mother, Minna Zuelow Snyder, next to his father, Howard Snyder, in about 1918 at a house in South Dakota belonging to his mother’s family.

The 2015 self-published book gives a look at once wide-angled with the context of the war, the enemies and the European allies, as well as microscopic, detailed insights into what it was like fighting from a Flying Fortress and living through all the drama of World War II at home and overseas..

He’s making it into a documentary film that might be ready in about a year, Steve Snyder told the Capital Journal this week.

He’s retired and lives in California and for years has devoted his life to researching his father’s story..

Steve Snyder saw the Capital Journal’s coverage of Fort Pierre’s Lt. Cmdr John Waldron and his heroic but fatal flight in the Battle of Midway and sent a copy of his book.

His father’s experience was a real life mirror of the 1949 movie, “Twelve O’Clock High,” starring Gregory Peck, about the Eighth Air Force’s B-17 bomber campaign against Nazi Germany. The movie itself, of course, and the book were based on real events.

Steve Snyder’s book about his father also has elements of movies such as “Stalag 17” or “The Great Escape,” with some absurdities that echo “Hogan’s Heroes,” almost.

Steve Snyder tells the tale not only of his father’s experience, but of all nine other crewmen, two of whom died that day in the bomber. He includes details about their family life. He also has much about the Belgians and French who helped the Americans, some of them being shot by the German soldiers for doing it. Some of the crewmen got shot by German soldiers in cold blood, instead of being held as prisoners.

His father, 2nd Lt. Howard Snyder, was about as tall and handsome as Gregory Peck. At 28, he was the “old man” of his crew of nine, except for the radio operator, who was 30.

Snyder was about the last guy out of the plane as it began to fall apart. Two men didn’t make it out. He landed, hurt, in Belgium and was hidden by Belgian farm people who risked their lives as Nazi soldiers searched the countryside for Snyder and his crew.

Part of the quiet heroism of those men was seen in Howard Snyder.. Feeling useless, unable to make an escape across Europe, Snyder joined the French resistance fighters, the Maquis, making guerrilla attacks on German installations and movements.

If caught, he would have been shot, probably after being tortured, for taking part in the resistance. But from all he said or wrote, Howard Snyder acted as if it were just what a regular guy would do.

One of the amazing side stories in “Shot Down” is that of the “left waist gunner,” who perched near a door in the fuselage with a single 50-cal. machine gun.

Staff Sgt. Joe Musial was from New Jersey and the nephew of baseball legend Stan the Man Musial of the St Louis Cardinals.

More to the point, Joe Musial was a war hero even before he got on Snyder’s bomber. He was at Pearl Harbor when the Japanese attacked Dec. 7,1941. He flew his first combat missions during the Battle of Midway in June 1942, when Fort Pierre’s own Lt. Cmdr John Waldron was killed leading his squadron of torpedo bombers against the Japanese carrier fleet. Musial was awarded the Distinguished Flying Cross for his heroism in the Pacific war on a B-17. He served honorably and was sent stateside.

But when he didn’t have to, he asked to go back into combat. According to author Steve Snyder, Musial wrote his sister that he felt an obligation to help “these new boys going over into combat. They are so blame young. . . even though I know of what horror is ahead. Whether I come back or not is not important. Cause when you realize all the suffering, bloodshed and horror other people have already gone through in the occupied countries, even if I do give my life trying to help, it will be meager in comparison.”

That makes a baseball batting crown seem kind of small by comparison.

When the B-17 was shot down, Musial’s lower leg was shot off but he thought it was his back; he said it felt like he had been hit by a baseball bat.

Then he saw his bloody stump.

His first instinct was to remember his training, so he stuck it out the open doorway and in seconds, at 20,000 feet, his stump froze, stopping the bleeding.

He then got up, helped two comrades out of the plane, buckling one man’s parachute on him, before he bailed out. Musial survived, as did the other two men. Musial flew 78 missions.

When U.S. troops finally marched into Belgium, Sept. 2, 1944, driving the Germans east, Snyder and his surviving crewmen soon were back on the right side of the lines.

In a few days he was in Paris, then near London again.Only then was he able to telegraph his wife, Ruth, who had spent seven months with no idea he was alive.

On Sept 28, 1944, Howard Snyder sailed into New York Harbor and soon was back to regular life in California with his wife, their two daughters, one born while he was hiding from the Nazis. Steve Snyder came along later.

He writes in “Shot Down” that his father Howard Snyder kept in touch down the years with his Belgian helpers, writing them several times a year

In 1983, Howard and Ruth Snyder traveled to Belgium to see some of the people who had risked their lives to hide him from the Germans for months. One of the Belgian women, Ginette, was wearing a silk blouse her mother had made from Snyder’s parachute.

Snyder and several of his crew members took part in the Belgian American Foundation formed in 1988 by Belgians to honor the Americans who had liberated them from Nazi rule.

The author, Steve Snyder, in 1994 traveled to Belgium with his parents for the 50th anniversary of the liberation.

Steve Snyder retired in 2009 and he began his exhaustive research, tracking down the relatives of his father’s crew members, piecing all their stories together.

“It is our duty to remember,” Steve Snyder signs copies of his book.

For more information on “Shot Down,” available on Amazon and other places, go online to stevesnyderauthor.com

Purchase Shot Down on Amazon: Shot Down: The true story of pilot Howard Snyder and the crew of the B-17 Susan Ruth Paperback – by Steve Snyder