The problem of winter winds on that mountain-top airport 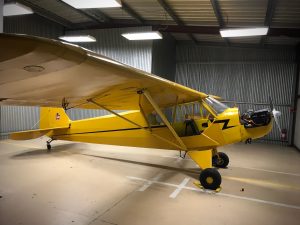 In the winter issue I was amused by Tyson’s adventure in flying back from Dayton, OH in his newly acquired C-3. Having flown out of the Charleston, WV airport as a passenger on two occasions, first in a DC-3 and the second in a DC-6, I appreciate the problem of winter winds on that mountain-top airport.

Also he said the following: “I succeeded in finding another snow covered grass strip in Fayetteville, WV, staffed by an old mechanic type who did not hear me land and thought I wanted gas in a can for use in a race car.He was not pleased to have to go out in the cold to pump a couple of gallons, but it meant 45 minutes to me and put Covington in range with a reserve.”

The mechanic was undoubtedly “5 Dollar Frank” Thomas who owned the airport for decades. He was a hoot, a mystic and poetry writer who charged $5 for 15 minutes over New River gorge. By the way, the Piper C-3 in the museum was owned by Frank in the mid-1950s, I know because I had a 15 minute lesson in that airplane in 1954.