They Taught the World to Fly!

Wind, sand, and a dream of flight brought Wilbur and Orville Wright to Kitty Hawk, North Carolina where, after four years of scientific experimentation, they achieved the first successful airplane flights on December 17, 1903.

With courage and perseverance, these self-taught engineers relied on teamwork and application of the scientific process. What they achieved changed our world forever. 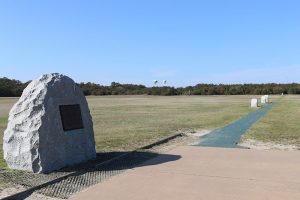 The First Flight Boulder and the Flight Line mark the location where the first flights on December 17, 1903 took off and landed.

On December 17, 1903, the flyer was repaired after Wilbur’s most recent failed attempt three days prior, and the Wright brothers felt they were ready once again to attempt manned, powered, controlled flight. The brothers were dressed in coats and ties that December morning – a touch of private ceremony for an event that would alter the world. With winter weather firmly setting in, this may have been one of the last chances of the season for the brothers to succeed. The 27-mph wind was harder than they would have liked, since their predicted cruising speed was only 30-35 mph. The headwind would slow their groundspeed to a crawl, but they proceeded anyway. Waving a bed sheet, they signaled the volunteers from the nearby lifesaving station that they were about to try again. Now it was Orville’s turn.

Words were impossible over the engine’s roar, so the brothers shook hands and Orville positioned himself on the flyer. Remembering Wilbur’s failed attempt, he situated himself firmly and tested the controls. The stick that moved the horizontal elevator controlled climb and descent. The cradle that he manipulated with his hips warped the wings and swung the vertical tails, which in combination turned the machine. A lever controlled the gas flow and airspeed recorder. The controls were simple and few, but Orville knew it would take all his finesse to handle the new and heavier aircraft.

At 10:35am, he released the restraining wire. The flyer moved down the rail as Wilbur steadied the wings. Just as Orville left the ground, John Daniels, a member of the lifesaving station, snapped the shutter on a preset camera, capturing the iconic image of the airborne aircraft with Wilbur running alongside. Again the flyer was unruly, pitching up and down as Orville overcompensated with the controls. But he kept it aloft until it hit the sand about 120 feet from the rail. Into the 27-mph wind, the groundspeed had been 6.8 mph, for a total airspeed of 34 mph. The flight lasted only 12 seconds, and the distance covered was less than the total length of a modern passenger airliner. But for the first time, a manned, heavier-than-air machine left the ground by its own power, moved forward under control without losing speed, and landed on a point as high as that from which it started. The brothers took turns flying three more times that day, getting a feel for the controls and increasing their distance with each flight. Wilbur’s second flight – the fourth and last of the day – was an impressive 852 feet in 59 seconds.

An enormous advancement had been made, transcending the powered hops and glides others had attempted. The Wright machine had truly flown. But it would not fly again; after the last flight it was caught by a gust of wind, rolled over, and damaged beyond simple repair. With their flying season over, the Wright brothers sent their father a matter-of-fact telegram reporting the modest numbers behind their remarkable achievement.

Where did the first flights happen?

Wilbur and Orville did two different types of experiments here at the park: gliding and powered flying. Their gliders took off from the Kill Devil Hills, the sand dunes in the area at the time, including Big Hill where the Wright Brothers Monument stands today. Their powered flights, the first flights, took off from the flat ground outside their camp. This spot is marked by the First Flight Boulder and Flight Line today.