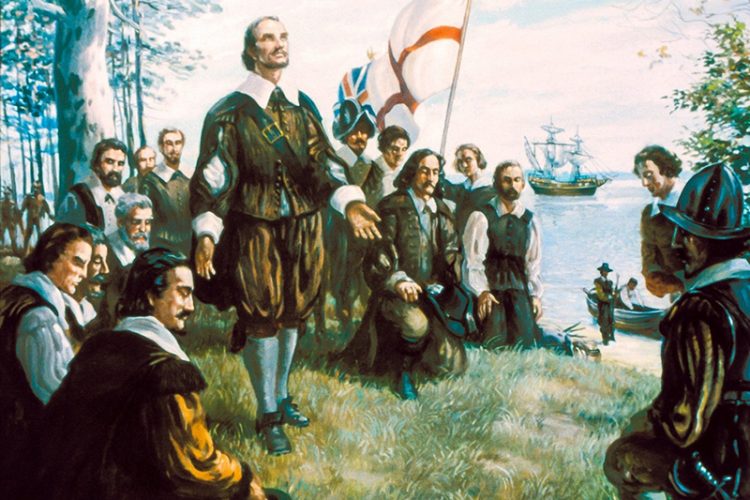 The descendant of an early settler that gets credit as the founder of the holiday, says Virginia, not Massachusetts, is the origin of the first English Thanksgiving.

Graham Woodlief, president of the Virginia Thanksgiving Festival, tells a different tale: It was “35 men that got off of a ship after two-and-half-months on the Atlantic, who said a prayer of thanksgiving and did it perpetually and annually,” at the order of King James I of England. That was one year and 17 days before the pilgrims landed in Massachusetts.

“No females, no Native Americans, no food,” he said.

Florida, Texas and Massachusetts stake similar claims to the holiday, but many historians credit Virginia as the true owner of Thanksgiving. Much like Connecticut has argued it that it, not North Carolina, should be credited as first-in-flight, a small but passionate group of Virginians are seeking to claim ownership to the first Thanksgiving, which they, along with many historians, say occurred in Virginia.

“We want to set the record straight,” Woodlief said.

The first English-speaking settlement in America was established in Jamestown, in 1607. Harsh living conditions, including extreme weather and drought, decimated the population. By 1610, just 60 of the original 490 settlers survived, including Capt. John Woodlief, Graham’s ancestor. The captain later returned to England, but in 1618 he met with a group of men to discuss the formation of a company and settlement in Berkeley Hundred, Virginia, a site better situated to grow crops and begin commercial ventures.

The “Berkeley Company” leased a ship and set sail across the stormy Atlantic, this time more adequately prepared with provisions and trained men, including Ferdinando Yate, who was commissioned to chronicle the journey.

According to Yate’s papers, Woodlief prayed upon setting shore in Virginia, as he was instructed to do by the Berkeley Company:

“We ordained that this day of our ships arrival, at the place assigned for plantation, in the land of Virginia, shall be yearly and perpetually kept holy as a day of Thanksgiving to Almighty God,” according to the papers.

That was Dec. 4, 1916, one year and 17 days before the Pilgrims landed in Massachusetts and almost 2 years before the pilgrims held a three-day Harvest festival with local Native Americans.

Yate’s detailed account of the voyage is a part of the Nibley Papers, which now reside at the New York Public Library. Yate’s story on the Virginia Thanksgiving was first published in The Richmond News Leader in 1931.

For centuries, the annual practice of giving thanks in late fall was commonplace across America. Most of these events were strictly religious ceremonies. But they took other forms, too,

Perhaps more credit for the Thanksgiving we know today is owed to President Abraham Lincoln, who issued the first Thanksgiving Proclamation on Oct 3, 1863. But just like Plymouth, Lincoln might have gotten more credit than he deserved.

Five days before issuing the proclamation, he received a letter from 74-year-old journalist Sarah Josepha Hale, who had been advocating for a national Thanksgiving date for 15 years. Past presidents ignored her call for unity as the country’s division’s along the Mason-Dixon Line widened, but Lincoln listened.

Later in the 20th century, another president muddled the record on the history of Thanksgiving. President John F. Kennedy’s 1962 Thanksgiving Proclamation gave full credit to the pilgrims in Massachusetts.

Virginia state Senator John J. Wicker took issue Kennedy’s portrayal and sent his complaint to the president in a telegram. Kennedy responded with an apology, attributing the mistake to a “New England bias” within the White House staff, according to Woodlief.

“In Kennedy’s ’63 proclamation it was corrected,” Woodlief said, “and Virginia was listed first.”

Indigenous people have a rightful claim to the holiday, too.

“The Native Americans have always celebrated a form of Thanksgiving with their harvest, a feast, and so forth,” Woodlief said. “Thanksgivings have been around since, the Roman times, to be honest with you. But this was the first English Thanksgiving in the New World.”

Woodlief said his organization has been working with the state government to update the K-12 curriculum on Thanksgiving. One day, he’d love to see Virginia license plates that say something like, “The First Thanksgiving State,” but he’s not quite there yet.