Wesley fell in love with flight at a very young age. At age 17, he was the youngest flight instructor in the country. He served in the U.S. Navy during WWII, he was involved in several aviation related committees, and he was a founding member of Civil Air Patrol. In 1978, Wesley was inducted into the VAHS Hall of Fame, and in 2015, he received the Congressional Gold Medal.

Wesley Hillman is just one of many outstanding aviators who have paved the way for future generations of aviators to succeed, which is why we honor and remember him. 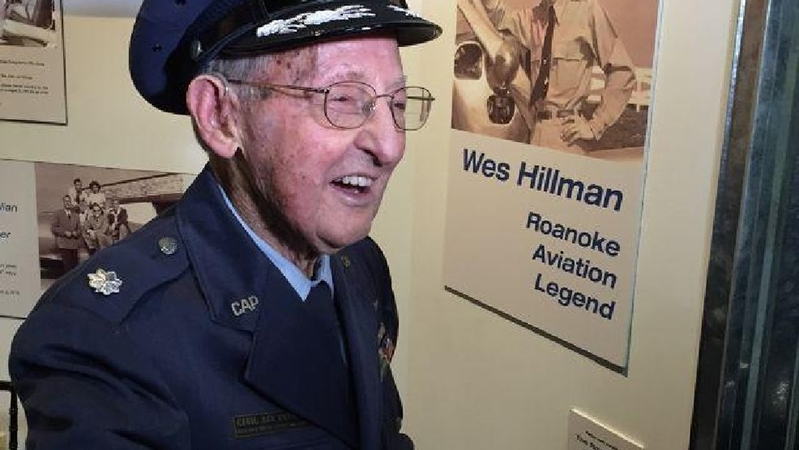 Ninety-two-year-old Roanoke resident Wesley Hillman received a long overdue honor on Friday. He was recognized as a recipient of the Congressional Gold Medal, the highest honor awarded to civilians in the United States. The medal was awarded to the Civil Air Patrol in honor of all World War II members for their service protecting the homeland. The original medal was presented at a ceremony on December 10, 2014 at the Capitol in Washington, DC. Forty-six recipients received their replica medals in person at a dinner following the ceremony. Hillman, who was unable to attend the ceremony, received his replica medal from Congressman Bob Goodlatte in the Wesley V. Hillman exhibit at the Virginia Museum of Transportation. Wes Hillman is an aviation pioneer in Virginia. Mr. Hillman got an early start in aviation. He loved to “hang around the airport” as a young teen, which led to him getting a job at the airport and eventually becoming a pilot. Hillman was the youngest flight instructor in the country at age 17, and instructed at Roanoke Airport for 57 years. He was once attributed with training more student pilots than any other instructor in southwestern Virginia. The advent of World War II brought about big changes for Hillman. “People just didn’t realize how bad off we were for pilots at the beginning of World War II, and they didn’t have anybody to teach” said Mr. Hillman. “For four years, I gave up my career to go into the Navy in order to teach.” From 1942 to 1953, Hillman was also the Commander of the Roanoke Squadron of the Civil Air Patrol. According to CAP records, their anti-submarine coastal patrols flew more than 24 million miles, spotted 173 U-boats and attacked 57. They also escorted more than 5,600 convoys and reported 17 floating mines, 91 ships in distress and 363 survivors in the water. While not a coastal squadron, the Roanoke Squadron reportedly flew patrols to look for prisoners of war that escaped from Catawba prison camp. Like other World War II populations, the number of surviving CAP veterans is dwindling and there are now only 80 identified survivors across the nation. “I salute CAP’s founding members for their legacy of service and sacrifice in protecting the homeland during World War II,” said Maj. Gen. Joe Vazquez, CAP’s national commander.”Now, some 73 years later, CAP’s rich history of service continues. Modern day members, nearly 60,000 strong, still perform vital homeland security missions, search and rescue missions and provide emergency response for natural and man made disasters.” Letters of congratulations to Mr. Hillman may be mailed to: Mr. Wes Hillman, c/o Virginia Museum of Transportation, 303 Norfolk Ave SW, Roanoke, VA 24016. Civil Air Patrol, the official auxiliary of the U.S. Air Force, is a nonprofit organization with 58,000 members nationwide, operating a fleet of 550 aircraft.CAP, in its Air Force auxiliary role, performs about 85 percent of continental U.S. inland search and rescue missions as tasked by the Air Force Rescue Coordination Center and is credited by the AFRCC with saving an average of 70 lives annually. Its unpaid professionals also perform homeland security, disaster relief and drug interdiction missions at the request of federal, state and local agencies. The members play a leading role in aerospace education and serve as mentors to more than 24,000 young people currently participating in the CAP cadet programs. Performing missions for America for the past 73 years, CAP received the Congressional Gold Medal in 2014 in honor of the heroic efforts of its World War II veterans. CAP also participates in Wreaths Across America, an initiative to remember, honor and teach about the sacrifices of U.S. military veterans.