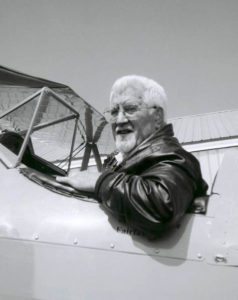 Inducted in 2002, Weldon C. Britton joined the U.S. Army Air Force during WWII and flew ACRECON missions in P-51s from New Guinea to Japan. After the War, he worked as a flight instructor, demonstration pilot and charter pilot. In 1952, he re-enlisted with the U.S. Army and flew L-16s and L-19s as a Forward Air controller and was awarded a Distinguished Flying Cross during the Korean War.

After completing Green Beret training, he commanded the Special Forces first aviation unit, the 57th Aviation Company, which flew the DeHavilland DHC-4 Caribous in Vietnam. In 1980, he became the Operations Supervisor at the Dulles Flight Safety District Office until his retirement in 1996.

He conceived the idea for the Virginia Aviation Safety Week, the longest running civilian safety program still in existence. He was a Director of the VAHS, President of the VAHS Northern Virginia Chapter and Chairman of the Board of the Discovery of Flight Foundation.