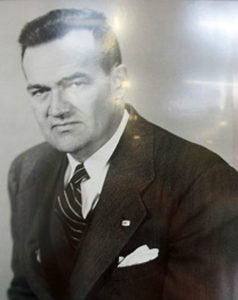 Inducted in 1978, Melvin N. Gough began his career as a mechanical engineer at the National Advisory Committee for Aeronautics (later NASA) in 1926 at Langley Field, Virginia. In 1929, he became a NACA experimental engineer-test pilot, and by 1943 he was appointed Chief of the Flight Research Division. Gough assisted in establishing the NACA High-speed Flight Station at Edward’s AFB, CA. He received the Chanute award for “outstanding contributions by a test pilot in the field of aeronautics: and the Flight Safety Award for his efforts in promoting safety.

Melvin N. Gough, a test pilot, engineer and inventor who helped promote aircraft safety and led the investigation into New York City’s worst aviation disaster, died on Sunday at his home in Melbourne Beach, Fla. He was 87.

His family said he died of cancer.

Mr. Gough directed the Federal inquiry into the collision between a United Airlines DC-8 jetliner and a Trans World Airlines Super-Constellation over Staten Island on Dec. 16, 1960. All 128 passengers and crew members on the two planes were killed, and six other people died when the jetliner crashed into a Brooklyn street.

Mr. Gough was then the director of the Civil Aeronautics Board’s Bureau of Safety, which he led from 1960 to 1962. He also directed investigations into a series of fatal crashes involving Electra prop-jet airliners. 32 Years of Flight Research

In 1926, Mr. Gough joined the National Advisory Committee for Aeronautics — the forerunner of the National Aeronautics and Space Administration — testing the flight characteristics of civilian and military aircraft at its research center in Langley, Va.