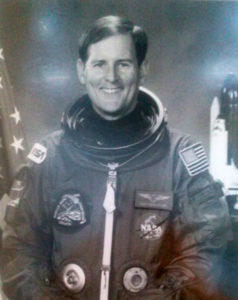 Inducted in 1997, Kenneth S. Reightler, Jr., graduated from the U.S. Naval Academy in 1973 at the top of his class. He acquired his master’s degree in Aeronautical Engineering at the U.S. Naval Postgraduate School. He has logged over 4,700 hours on 60 different types of aircraft and served as a carrier-qualified pilot on the U.S.S. Dwight D. Eisenhower.

Ken joined the astronaut program in 1987. He piloted the Space Shuttle “Discovery” STS 48 to deploy an Upper Atmosphere Research Satellite (UARS) to provide scientists with their first complete data on stratospheric ozone. His second flight was in 1994, also in the “Discovery” STS 60, the first joint USA/Russian Space mission. He has logged 327 hours in space, 212 orbits of Earth covering over 5.3 mission miles.

He is widely known for his unselfish devotion to the education and motivation of Virginia’s youth. He has lectured throughout the Commonwealth inspiring youngsters of all ages.

He retired as a Captain from the U.S. Navy and NASA in 1995, and became a Vice-President with Lockheed Martin Space Systems and Services Company.

EDUCATION: Graduated from Bayside High School, Virginia Beach, Virginia, in 1969; received a bachelor of science degree in aerospace engineering from United States Naval Academy in 1973, and master of science degrees, in 1984, in aeronautical engineering from the United States Naval Postgraduate School and in systems management from University of Southern California.

EXPERIENCE: Reightler graduated from the United States Naval Academy in 1973, and was designated a naval aviator in August 1974 at Corpus Christi, Texas. After replacement pilot training in the P-3C airplane, he reported to Patrol Squadron Sixteen in Jacksonville, Florida, serving as both a mission commander and patrol plane commander. He made deployments to Keflavik, Iceland, and to Sigonella, Sicily. Following jet transition training, Reightler attended the United States Naval Test Pilot School at Patuxent River, Maryland. Upon graduation in 1978, he remained at the Naval Air Test Center (NATC) where he served as test pilot and project officer for a variety of flight test programs involving the P-3, S-3, and T-39 airplanes. He later returned to the Test Pilot School, serving as a flight test instructor and safety officer flying the P-3, T-2, OV-1, T-39, and TA-7 airplanes. In June 1981 Reightler was assigned to the USS Dwight D. Eisenhower (CVN-69) as communications department head and carrier on-board delivery pilot, making two deployments to the Mediterranean Sea. Selected for postgraduate education, he attended the Naval Postgraduate School in Monterey, California. Redesignated an aerospace engineering duty officer (AEDO) he was sent to transition training for the F/A-18 airplane with Strike Fighter Squadron 125 (VFA-125) at Naval Air Station Lemoore, California. He then reported for duty at the United States Naval Test Pilot School in March 1985, serving as the chief flight instructor until his selection for the astronaut program.

He has logged over 5,000 hours flying time in over 60 different types of aircraft.

NASA EXPERIENCE: Selected by NASA in June 1987, Reightler completed a year of astronaut candidate training and was designated an astronaut in August 1988.

From September 12-18, 1991, he was the pilot on the crew of STS-48. This was the first Space Shuttle flight in support of “Mission to Planet Earth.” During the five-day mission, the crew aboard the Space Shuttle Discovery successfully deployed the Upper Atmosphere Research Satellite (UARS), designed to provide scientists with their first complete data set on the upper atmosphere’s chemistry, winds and energy inputs. The crew also conducted numerous secondary experiments ranging from growing protein crystals, to studying how fluids and structures react in weightlessness. After 81 orbits of the Earth, STS-48 Discovery landed at Edwards Air Force Base, California.

Reightler next served as pilot on STS-60, the first joint U.S./Russian Space Shuttle Mission. Launching from the Kennedy Space Center on February 3, 1994, STS-60 was the first flight of the Wake Shield Facility (WSF-1) and the second flight of the Space Habitation Module (Spacehab-2). During the eight-day flight, the crew of Discovery, including Russian cosmonaut Sergei Krikalev, conducted a wide variety of biological, materials science, earth observation, and life science experiments. Following 130 orbits of the Earth, STS-60 landed at Kennedy Space Center, Florida, on February 11, 1994.

With the completion of his second mission, Reightler logged over 327 hours in space.