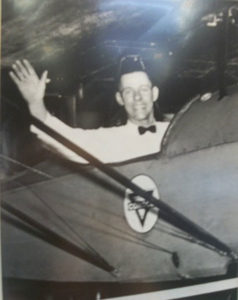 Inducted in 1979, Floyd G. Clark learned to fly in the 1920s and flew with Roscoe Turner at Richmond Air Junction. From 1938 to 1960 he operated Central Airport, which provided aviation services for Richmond, Va. During that time he was sworn in as one of the first Sky Police in the country. After World War II he continued operating the airport as a hub of aviation activity in the Commonwealth.