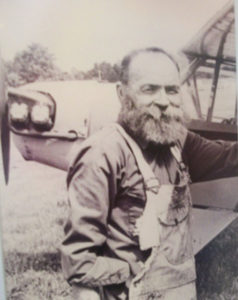 Inducted in 1997, Charles A. Kulp, Sr., is best known for his famous Flying Farmer Airshow performances, which have been seen by hundreds of thousands of people at over 600 airshows covering the eastern half of the U. S. and England.

He took his first flight lesson at age 16. During WWII, he served in the U.S. Navy as an airplane mechanic with duty aboard the U.S.S. Siboney (CVE-112) as an F6F Hellcat Plane Captain. After the war, he earned his Commercial and Flight Instructor licenses, and A & P mechanics rating in addition to becoming a Pilot Examiner and Aircraft Inspector. He is known for the acquisition and restoration of the 1927 Pitcairn PA-5 Mailwing on display in the Virginia Aviation Museum.

In addition, he restored the famous Frank Hawks Texaco Eaglet Glider and a 1929 Fairchild KR-24 both now owned by the National Air & Space Museum in Washington, D.C. He is widely admired for his quiet, gentle personality and his appeal to hundreds of youngsters he has introduced to aviation.

He is truly a Virginia Ambassador-of-Aviation.