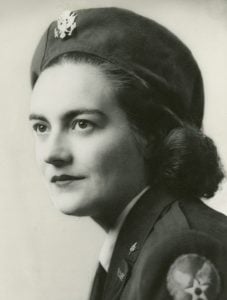 Inducted into the Virginia Aviation Hall of Fame in 2000, Ann Baumgartner Carl took her first flight in a J-3 Piper Cub in 1940. Her addiction to flying was immediate and she declared, “This is what I was made for.” During WWII she became a Womens Airforce Service Pilot and was the only WASP to serve as a military test pilot. She flew in-flight refueling test missions, tested new gun sites, and flew the RP-47E, the first fighter with a pressurized cockpit. In October 1944, she became the world’s first woman to fly a turbo jet powered aircraft, the Bell YP-59A, a distinction that would remain unchallenged for 10 years. Ann was honored to become a personal friend of Orville Wright and served as his escort to numerous aviation events for many years.

The article below is from the CAF Rise Above website, written April 3, 2020:

“Well, I guess just a sort who, instead of religiously practicing the piano, had to go out and see what was happening in the woods that day, or down at the brook, or high on the hill. And then one day I saw an airplane fly by.”

Ann G. Baumgartner Carl (August 27, 1918 – March 20, 2008) was an American aviator who became the first American woman to fly a United States Army Air Forces jet aircraft when she flew the Bell YP-59A jet fighter at Wright Field as a test pilot during World War II. She was assigned to Wright Field as an assistant operations officer in the fighter test section as member of the Women Airforce Service Pilots program.

Originally, Baumgartner reported to Houston, Texas in January 1943 to be in the Women Airforce Service Pilots Class of 43-W-3, but she became ill with the measles and thus graduated on July 3, 1943, with the fifth WASP class (43-W-5). After completing the training, Baumgartner was assigned to Camp Davis in North Carolina as a tow target pilot. Camp Davis was an artillery training base and the WASPs flew as visual and radar tracking targets. Baumgartner flew the Douglas A-24, Curtiss A-25, Lockheed B-34, Cessna UC-78 and Stinson L-5 while at Camp Davis.

Originally her duties were primarily clerical but over time she was permitted to fly as a test pilot. Additionally, Baumgartner was assigned to transport staff officers to other Army bases, and delivered planes as required. When Baumgartner worked in the bomber flight test division for a short time, she gained pilot and copilot experience in the B-17, B-24, B-29, the British de Havilland Mosquito, and the German Junkers Ju 88. After her reassignment back to the fighter test division, she flew America’s first jet aircraft, the Bell YP-59A on October 14, 1944, becoming the first American woman to fly a jet. Her assignment as a fighter flight test pilot at Wright Field ended in December 1944 when the WASP program was disbanded.