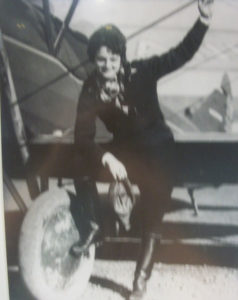 Inducted in 1989 into the Virginia Aviation Hall of Fame, Louise M. Thaden was one of the most famous women in aviation in the 1920s and 30s. She set numerous world records including the 1928 altitude record (20,260 feet), a soloendurance flight record in 1920 of over 22 hours, and the light plane speed record of 1934. In 1932 Thaden and Frances Marsada used primitive air-to-air refueling technologies to set a record of 166 hours aloft. She won a number of air races including the First Women’s Air Derby in 1929 and the Bendix Transcontinental Air Race in 1936. While a resident of Virginia, Thaden was instrumental in developing the Civil Air Patrol and served as director of the Cadets of the Virginia Wing.

The Bendix Transcontinental Air Race of 1936 was the most prestigious win of Thaden’s career. Thaden and her co-pilot Blanche Noyes enjoyed the opportunity to compete with the men but didn’t think they would win. When they landed they thought the commotion surrounding their plane was due to the fact they had come across the finish line backwards not that they had won. Thaden’s husband accidentally confessed he had not expected such a great performance from such a worn engine. She was shocked to know about the engine but glad her husband had not told her. They were awarded the $4,500 first place money and the $2,500 prize for first female team to cross the finish line.

Biography
Louise McPhetridge was born in Bentonville, Arkansas on November 12th, 1905. She graduated from the Bentonville High School and attended the University of Arkansas from 1921 to 1925. She left college in her junior year and in 1927 joined Travel Air Corporation where her love of flying blossomed. The famous Walter and Olive Beech arranged a job for her on the Pacific Coast in which she could learn to fly. This was the start of a lifelong friendship between the two women.

Louise soloed in 1927 to earn her pilot’s license. In 1928, she met and married Herbert Thaden, a former U.S. Army pilot and engineer. That same year she set her first world record for the women’s altitude mark of 20,260 feet. She followed up this accomplishment shortly afterwards by setting a new woman’s endurance record of 22 hours, 3 minutes and 12 seconds in a Hisso-powered Travel Air in March of 1929. Thaden went on to pass her test for a transport license, becoming the fourth female transport pilot in the U.S. In August of that year she became the first woman to win a national air race when she won the Women’s Air Derby flying from Santa Monica, California to Cleveland, Ohio; a distance of almost 2,500 miles.

In 1930, she and fellow enshrinee, Amelia Earhart, formed the Ninety-Nines, a group of women whose aim was to foster fellowship and inspiration for female pilots. Thaden served as the group’s vice-president from 1931-32 and as treasurer from 1930 to 1934.

In 1932, Thaden, along with Francis Marsalis, set a new endurance record by flying a Curtiss Thrush biplane for 196 hours over Long Island, New York. During the eight days, Thaden made seventy-eight air-to-air refueling contacts, and sometimes made live radio broadcasts to a national listening audience.

Thaden then returned to the commercial side of aviation, serving as factory representative and demonstration pilot for Beech Aircraft Corporation. In 1934, with Phoebe Omlie’s persuasion, she went to work for the Bureau of Air Commerce, promoting marking of air fields and landmarks nationwide. Thaden was assigned the western part of the country and she found the work fascinating.

In 1936, Thaden took up her own private career again. In July she set a new speed level for women. Later, in September of 1936, on Olive Beech’s recommendation, Walter Beech entered his Beech Staggerwing C17R in the Bendix Transcontinental Speed Dash with Louise Thaden as pilot and Blanch Noyes as co-pilot and navigator. The pair were the first to cross the finish line and the first women to win the Bendix race. Thaden’s victory set a new East-to-West record of 14 hours, 54 minutes. She also received the Harmon Trophy as the “outstanding woman pilot in the U.S. in 1936.”

For a short time after the Bendix, Thaden returned to the Bureau of Air Commerce. She then went back to the Beechcraft Company, demonstrating their planes from coast to coast.

After 1937, Thaden decided follow the course she’d once outlined to her good friend Amelia Earhart: spending time with her family. In 1938, she published her memoirs entitled High, Wide and Frightened.

A long and distinguished career came to an end on November 9th, 1979, when Louise Thaden died.