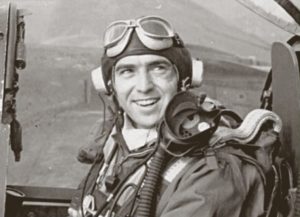 John J. Bannister Sr. had a strong love for aviation, which he spent his lifetime pursuing. In August 1942, he entered the U.S. Army Aviation Cadet Program and commissioned as a 2nd Lt. in the Army Air Corps on July 28, 1943. During WWII, he flew 59 combat missions in a P-38 and over 70 missions in a P-51 Mustang, including flying air cover in the D-Day invasion of Normandy. After the war, Bannister joined the Air Force Reserve and transferred into the Virginia Air National Guard as a charter member of the 149th Fighter Squadron. After completing active duty, he worked for the FAA as an air traffic controller and retired as Assistant Tower Chief at Richard E. Byrd Flying Field (later Richmond International Airport) in 1975. Bannister was involved with the formation of the VAHS (Virginia Aeronautical Historical Society) and contributed to the funding of the construction of the Virginia Aviation Museum where he was a docent for 10 years.
—