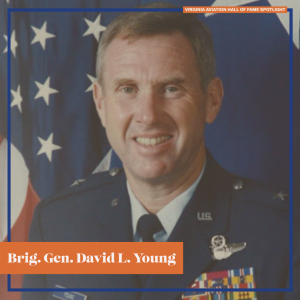 After serving 29 years in the Air Force, which included both enlisted and commissioned assignments, he retired as Brigadier General with over 6,000 hours of military flying time, over 1,200 combat hours and over 2,000 hours as instructor and examiner. His experiences in the Air Force included time at the Pentagon, U.S. Joint Forces Command, the Air Force Personnel Center, Air War College faculty, and a variety of flying assignments, twice as wing commander. In 2002, Brig Gen Young co-founded Liberty University’s aeronautics program from the ground up. The aviation program grew into the School of Aeronautics, with Brig Gen Young as the founding dean. He also served on the Lynchburg Regional Airport Commission, the Virginia Aviation Board as the President of the Virginia Aviation Business Association, as the Chairman of Board of the Virginia Aeronautical Historical Society, and currently serves as a board member of the Shannon Air Museum.