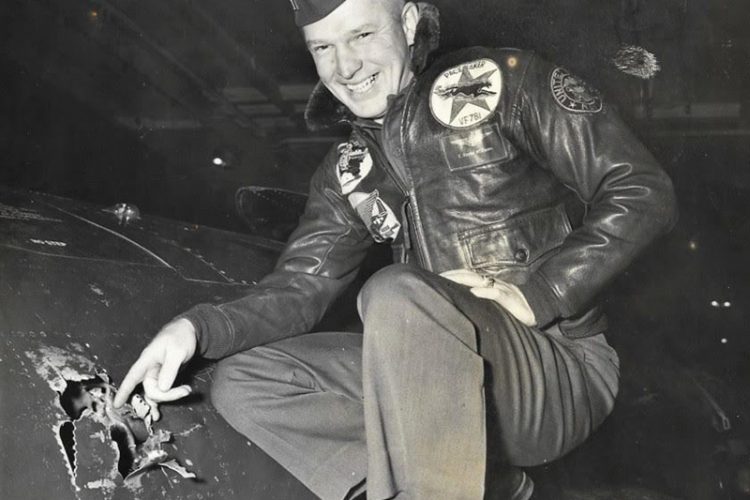 It was an incredible moment – an aerial engagement on 18 November, 1952, pitting one F9F-5 Panther against seven superior MiG-15s resulting in four MiGs down. This engagement is unmatched in either the Korean War, the Vietnam War or since then.Yet, the story is just beginning to reach the audience it deserves.

During a private one-on-one meeting with VADM Briscoe, ComNavFor, Far East, Lt. Williams was ordered “…not to tell anyone” about the engagement. He didn’t, not to his squadron C.O. , not to his CAG, not the C.O. of his carrier (USS Oriskany)… not even his wife.

Political concerns in Washington regarding NSA real-time recording of the engagement (and the fact that the MiG-15s were flown by Russian pilots) invoked a Top Secret lid on the engagement for some 50 years. This crucial NSA information was not even available to the drafters of Royce’s Silver Star citation.

Yet, of the 18 November event, freezing temperatures, a 400’ ceiling, snow clouds, 40kt wind and cumbersome immersion suits were the order of the day for the carrier-launched pilots. Lt. Williams was wearing one.

The Aerial Engagement in the F9F-5

Expecting reprisal from a CTF-77 major strike on an industrial complex only five miles from the Korea-Russian border (of which Lt. Williams participated), the Oriskany launched a CAP with Lt. Williams as section lead. Immediately after launch into a low overcast, Oriskany CIC (Combat Information Center) directed the CAP (Combat Air Patrol) toward incoming bogeys.

As the CAP broke into the clear at 12,000’, the flight leader reported a fuel pump warning light. He and his wingman were directed to orbit overhead the Oriskany. At the same time, Lt. Williams spotted the contrails of seven MiG-15s.

Leaving the safety of cloud cover, Lt. Williams test-fired his (four 20mm cannon) and climbed his section (two aircraft) toward the advancing MiG-15s. Williams’ wingman was unable to fire his guns, effectively turning the engagement into a F9F-5 vs. seven MiG-15 fight.

Approaching 26,000’, four MiGs made a slashing attack out of the sun. Lt. Williams broke head-on into the attack and with a quick reversal, shot down the “tail end Charlie” of the group. The attack separated Lt. Williams and his wingman (leaving Williams to carry on the fight alone).

Lt Royce Williams engaged in a solo battle against 5 MiGs!

A fierce 35+ minute aerial combat followed. Lt. Williams superb pilot skills and gunnery accounted for three MiGs with a fourth (the Russian flight leader) confirmed some years later. With Lt. Williams having fired all of his ammo and suffering a 37mm hit in his right wing – caused by a closely pursuing MiG-15 – Williams’ aircraft suffered a total loss of rudder and flaps. He dove for cloud cover. With only elevator control and a little aileron control, Lt. Williams skillfully jinked and porpoised until safely in the snow clouds.
Preparing for a straight-in approach to Oriskany, Williams received friendly fire. Nevertheless, Lt. Williams dropped his tail hook and let gravity drop the landing gear. Finding the aircraft uncontrollable below 170kts – critically above the normal 105kts – and facing a 40kt cross-deck wind, Lt. Williams demonstrated masterful airmanship in landing safety aboard, catching the #3 wire.

Examination of his aircraft reveals 263 holes. Fought entirely over water, halfway between Oriskany and Vladivostok, Russia, Lt Williams singular courage above-and-beyond the call of duty against overwhelming odds stopped the MiG-15s’ attack in its tracks.

The award-winning history brand, Old Guys and Their Airplanes (OGTA), the Distinguished Flying Cross Society and South Dakota Public Broadcasting are presenting a live Q&A interview with Royce this December 2, 2020.

The interview will be originated from the San Diego Air & Space Museum and made available free of charge via https://www.sdpb.org/OGTADebrief. The event will be held at times convenient for educators, teachers and group leaders: 0900 PT, 1000 MT, 1100 CT and 1200 ET. The link will “go live” approximately 15 minutes before show-time.

The push for a Congressional Medal of Honor

Participants are encouraged to download the TIMELINE document created by RADM Shelton as part of a support package created to aid in awarding Royce Williams the Medal of Honor for his outstanding and heroic act that day. The document is available here. Press release containing more information about the event is accessible here.