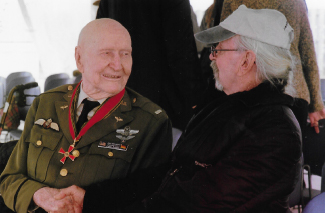 The Candy Bomber & The Berlin Airlift

At 99 years of age, (Ret.) Air Force Col. Gail S. Halvorsen was inducted into the National First Flight Society’s Hall of Fame in Kitty Hawk, North Carolina on December 17, 2019. The NN-MP Chapter’s March program (cancelled, due to Covid-19) would have featured a DVD that profiles Halvorsen’s service as a pilot during the Berlin Airlift, 1948-49, and his creative but unorthodox gesture of goodwill; an impulse that initiated candy drops to the children of Berlin via improvised handkerchief
“parachutes.”

Initially an “unauthorized” activity by Halvorsen and a few of the airlift pilots, the candy-drop practice spread and was eventually recognized and (surprisingly approved by the officer in charge, Gen. William Tunner. (Tunner is generally acknowledged as the “father” of military airlift operations, and at retirement he became a resident of Gloucester County, Virginia, where he lived until his death in 1965.

The candy-drops, dubbed “Little Vittles,” grew into a program within the Berlin Airlift that boosted morale among the airlift pilots, the isolated and destitute population of post-WWII Russian-held Berlin, and the supporting candy-drop network that grew in the United States.

The C-54 “Spirit of Freedom” aircraft that visited Shannon Air Museum in the Fall of 2019 actually flew in the Berlin Airlift and is now a flying museum that chronicles that Airlift. The “Spirit of Freedom” also displays artifacts and memorabilia that relate to the “Little Vittles” candy-drops and recognizes the inspiration of Col. Halvorsen, the original “Candy Bomber.” With the visit of the historic aircraft and the National First Flight Society’s Hall of Fame recognition for Halvorsen, the timing is right for the Chapter’s “Candy Bomber” program, which will be presented at a future NN-MP Chapter meeting when Covid-19 conditions allow. Watch the VAHS website for an announcement.