THE B29 B24 SQUADRON HONORS FIVE VETERANS WITH FLIGHT 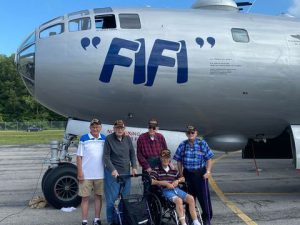 Toledo, OH (August 23, 2022) – The B-29/B-24 Squadron had the honor of hosting two veterans on the B-29 FIFI and three veterans on the B-24 Diamond Lil during a transition flight in Ohio from Toledo to Mansfield during the AirPower History Tour. The two Korean War veterans flew on FIFI, Jack Brady of Ohio and Clint Davis of Kentucky. The veterans that flew on Diamond Lil were, John Brown and Henry Armstrong of Ohio who served in World War II, Korea, and Vietnam and George Gierach of Ohio served in World War II. During the flight, they reminisced about their time in the service and regaled the crew with their stories. This flight is another excellent example of #WhyWeFly.