Sleeker and Faster: The Impact of the Full Scale Wind Tunnel 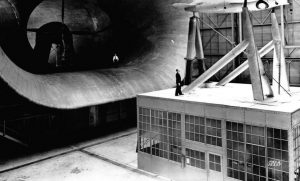 Sleeker and Faster: The Impact of the Full Scale Wind Tunnel
Posted on Apr 20, 2020

This story begins in 1929, a full 12 years before the United States was plunged into the maelstrom of World War II. That year, the air just north of the tidewater town of Hampton, Virginia, was filled with the sound of saws, loud hammering, and heavy construction equipment. In 1929, the National Advisory Committee for Aeronautics (NACA) authorized the construction of a massive wind tunnel to be located at the NACA Langley Memorial Aeronautical Laboratory in Hampton. Becoming operational in May 1931, this wind tunnel had a test section 60 feet in width and 30 feet high, large enough to mount not just a model of an airplane but rather the whole airplane itself. For this reason, the tunnel was called the NACA Full Scale Wind Tunnel (FST). At the time, the FST was the largest wind tunnel in the world – a stunning facility for aerodynamic testing.

But why a wind tunnel of this huge size? Wind tunnels had existed since 1870, when the English inventor Francis Wenham designed and built the first wind tunnel in history at Greenwich. By 1929, scores of wind tunnels had been built world-wide for aerodynamic testing, including one by the Wright brothers. However, all these tunnels were small and were limited to testing relatively small models. The NACA’s Full Scale Tunnel was the first facility large enough to test a whole airplane.

But why was the testing of a whole airplane in a wind tunnel so important as opposed to testing a smaller model? There are scale effects in applying aerodynamic data obtained on small models that compromise the data when applied to the “real thing.” This is especially true with the data for aerodynamic drag, an important datapoint to measure. Everything else being equal, the maximum velocity of a given airplane in level flight depends strongly on drag – the lower the drag, the faster the maximum speed of the airplane. In particular, for new airplanes coming off the drawing boards at the beginning of World War II, the maximum speed of a combat fighter aircraft became a major design criterion. Therefore, the accurate prediction of aerodynamic drag was critical to the success of these new designs.