Searchers have located the wreck of a P-38 Lightning fighter aircraft buried deep within a glacier in Greenland, more than 70 years after a lost squadron of U.S. warplanes crash-landed on the ice there during World War II.

The search team plans to dig and melt the rediscovered warplane out of the glacier next summer — and the searchers hope that their techniques can locate other World War II air wrecks in the region, including some that carried MIA (missing in action) U.S. airmen. [Photos: WWII Battleship ‘USS Juneau’ Discovered]

The search leader, California businessman Jim Salazar, told Live Science that the team found the wrecked P-38 on July 4 beneath more than 300 feet (91 meters) of ice using a ground-penetrating radar antenna fitted to a heavy-lift aerial drone. The drone was scanning a part of the glacier where hints of the buried warplane were detected in 2011.

A ground team then used a thermal probe to melt through the thick ice — it came up covered in hydraulic oil from the buried aircraft.

Salazar said that the radar-equipped drone had located the warplane beneath the ice in a few minutes of flight time, while a ground crew would have taken 6 or 7 hours to cover the same area with a radar sled.

The buried plane was in a remote region made dangerous by hidden ice crevasses, sudden storms and hungry polar bears. “This is a very cold-weather region and an inhospitable location,” Salazar said.

Snowball Route
This latest find echoes the 1992 recovery of another P-38 fighter from the same “Lost Squadron” of U.S. warplanes in Greenland. That fighter was eventually restored to flying condition under the name “Glacier Girl“.

Both aircraft were part of a group of two B-17 bombers and six P-38 fighters flying from the U.S. to Britain in July 1942. They were traveling through a chain of secret airbases in Newfoundland, Greenland and Iceland known as the Snowball Route.

Hundreds of U.S. aircraft flew this route during World War II as part of Operation Bolero, which delivered warplanes, pilots, equipment and supplies for the planned Allied invasion of Nazi-occupied Europe.

But after flying into a severe blizzard, the eight aircraft from the lost squadron were forced to crash-land on the surface of the glacier beside Køge Bay in southeastern Greenland.

Salazar said that the area was known to pilots as Piteraq Alley because of its tendency to spawn severe snowstorms that can arise in minutes — called “piteraq” in the Greenland Inuit language.

A similar storm kept the search team in its tents on the glacier for three days during this summer’s expedition, Salazar said.

Wilson and the other airmen from the lost squadron warplanes were rescued from the ice, but other U.S. servicemen whose planes crashed in the same area were not so fortunate.

“It’s Greenland’s ‘Bermuda Triangle‘ … the weather there shifts in a matter of minutes,” Salazar said. “As a pilot, you can clearly understand why there were so many difficulties in that area.” [Gallery: Lost in the Bermuda Triangle]

Salazar has led searchers to the Greenland glacier in search of the Lost Squadron planes since 2011, through a nonprofit he co-founded with colleague Ken McBride called Arctic Hot Point Solutions.

The summer expeditions, each consisting of a team of about six searchers, had cost between $300,000 and $450,000 apiece, Salazar said. Most of that money has come from Salazar himself, who owns a machinery business in Pasadena, California. 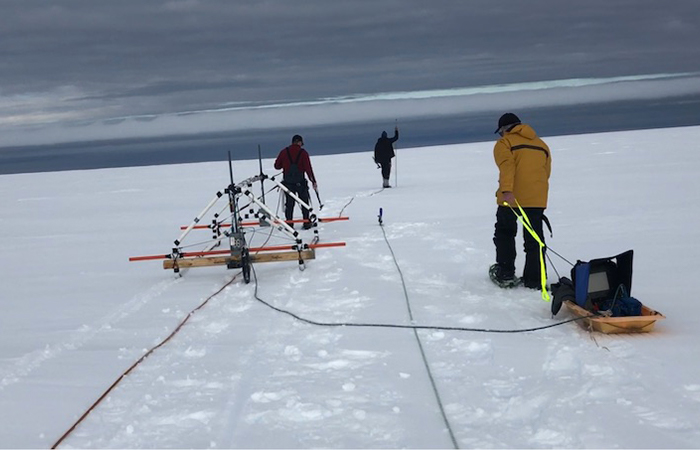 After the location of the Lost Squadron was tentatively identified by a drone, a ground-based team did a survey to confirm the buried aircraft’s location. (Image credit: Hot Point Solutions)

The team now hopes to recover the newly found P-38 fighter from its icy tomb and restore the plane to flying condition.

The twin-tailed P-38 Lightning was an iconic World War II aircraft, but only about 10 remain in museums around the world and only a few are still flying, Salazar said.

Aircraft graveyard
Salazar now hopes that aerial drones equipped with ground-penetrating radar can help the team find the wreck of a Grumman J2F-4 amphibious “Duck” aircraft, operated by the U.S. Coast Guard. That plane crashed on the same glacier in Greenland in November 1942, just a few months after the lost squadron went down.

The Duck aircraft had been part of a search effort for the surviving crew of a C-53 Skytrooper aircraft, operated by the U.S. Army Air Corps, that also crash-landed on the glacier in bad weather, Salazar said.

The bodies of the crew from the crashed C-53 were never recovered; nor were the bodies of three U.S. serviceman on board the Duck aircraft recovered, in spite of a multimillion-dollar search effort funded by the U.S. government’s Defense POW/MIA Accounting Agency, or DPAA.

In 2013, the DPAA announced that it had found the Duck crash site, but the reported discovery turned out to be a “false positive,” Salazar said.

Although radio contact established that about five of the U.S. servicemen on board the C-53 had survived the crash, bad weather and the subsequent crashes of the search-and-rescue aircraft meant the crewmen were never brought back — eventually they would have starved or frozen to death. “Our intention is to repatriate these men,” Salazar said.

Story credit: https://www.livescience.com/63423-lost-squadron-unearthed-greenland-glacier.html
Photo credit: A World War II airplane that was lost in Greenland decades ago has been found deep beneath glacial ice. The warplane was part of the so-called Lost Squadron, and was first spotted by an aerial drone, though a ground-based survey confirmed the location. Searchers hope to eventually melt the ice and recover the warplane.
(Image: © Hot Point Solutions)