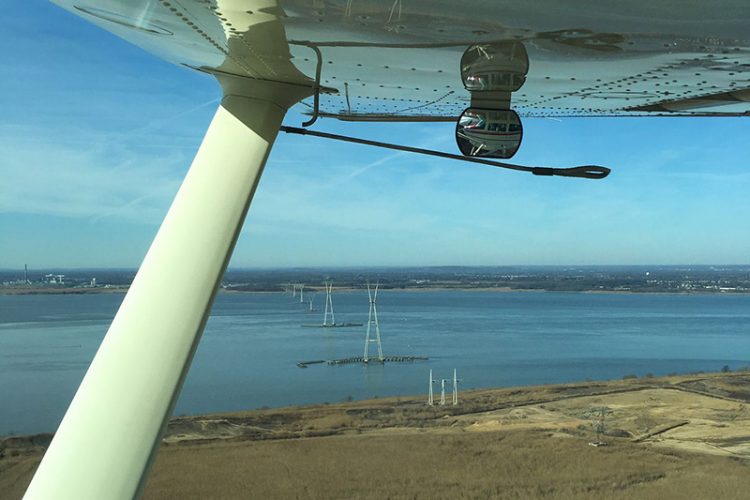 LightHawk has carried on through the 2020 COVID-19 pandemic with socially distant flights monitoring conservation efforts across the US and abroad. It announced its annual awards for the year to recognize pilots who have contributed most to its mission to connect conservation groups with the GA platforms and pilots that can provide them with lift.

Mike Schroeder, winner of the association’s Rockwell Award, exemplifies the spirit of the pilot for whom the award was named, Bill Rockwell—who always flew the extra mile for the organization. Schroeder flew with 23 passengers (pre-pandemic) and 7 wolf pups. According to LightHawk, “These missions ranged from flying program staff for land trusts in Arizona over the fragmented Upper Santa Cruz River to flying journalists and key decision-makers over the Salton Sea to better understand the scale of environmental and public health challenges there. A set of flights to cross-foster Mexican wolf pups from a captive facility to a wild den within 20 hours of leaving their birth mother was the most complicated, requiring intensive preparations and multiple last-minute changes. Mike endured all of this with flexibility and a ‘can-do attitude’. And then he signed up to do this all again, flying a total of 7 pups from the birth mothers to their new wild packs in Arizona.”

The Carpenter Award, for the pilot flying the most hours during the year, went to Will Worthington, who donated 62 hours of his own time plus aircraft time, culminating 16 years of flying for the organization and serving on its board of directors. Worthington’s missions “ranged from finding missing CA condors in the wild to flying scientists, elected officials and journalists on educational tours over the Salton Sea,” according to LightHawk. “He successfully completed missions in Arizona, California, Utah, and Texas. Will also remains a dedicated pilot flying to support our work in Mexico and mentor to volunteer pilots who are new to flying with LightHawk in Mexico.”

The Rookie of the Year award celebrates the first year with LightHawk for pilot Jim Schmidt. After joining the organization’s pilot roster in March 2019, Schmidt signed on for 23 missions, conducting 13 of them. As the organization notes, “Jim Schmidt and his hardworking Cessna 206 soared above the Belgrade Lakes region of Maine for the 7Lakes Alliance, helped the Nature Conservancy survey its conservation easements off the rugged coast of Maine, captured stunning 4K video of the mid-coast region for the Maine Coast Heritage Trust, and kept close watch over thousands of acres of the northern forests in Maine and New Hampshire for The Nature Conservancy.”

The President’s Award was given to Wayne McClelland, who has flown more than 30 hours for LightHawk this year. McClelland also volunteers his time to Flying Doctors, Angel Flight, and Pilots N Paws. McClelland carried on flights in Southern California, helping a local journalist “get a clear-eyed perspective of the challenges facing the Salton Sea, and transporting endangered California condors,” according to LightHawk’s posting on the award.

The Spirit of LightHawk Award gives thanks to one of the top pilots in the organization, and this year it goes to Steve Meyer. According to LightHawk, Meyer’s 47 hours of flying in 2020 typify the kind of honest effort so many pilots deliver. “[Meyer’s] flights gave reporters and decision makers an invaluable perspective of proposed oil and gas leases that could affect sage grouse habitat in northern Colorado, and helped to engage reporters and scientists in the ongoing restoration work on the Colorado River Delta. Photos and stories from these flights ended up on the pages of the Denver Post and the Arizona Republic.”

The ability of the organization to flex and meet the challenges presented by the pandemic illuminate how GA in the general sense has also risen to meet those changes. Modifying the typical mission—which would involve carrying an observer and/or scientist from a conservation group—to taking high-quality video instead allowed LightHawk to carry on with its purpose, to give insights from above to those who make decisions regarding environmental and conservation programs. But there’s still no substitute for an actual passenger-carrying flight, which the organization will continue as local restrictions and considerations allow. “Despite a global pandemic, LightHawk volunteer pilots have been hard at work flying for conservation,” said LightHawk CEO Michelle Rutledge. “We would normally be presenting these awards at our Annual Meeting and Fly-In, which was postponed until September 2021. The silver lining in all of this is that many more people have learned about the value GA provides to conservation (and humanitarian and nonprofit needs)! It’s been a privilege to honor these volunteers who selflessly give their time and talent to make the world a better place.”

—
Story credit: https://www.flyingmag.com/story/news/lighthawk-2020-pilot-recognition/
Photo credit: LightHawk missions include those that monitor waterways, such as the Delaware River, for seasonal changes. Julie Boatman