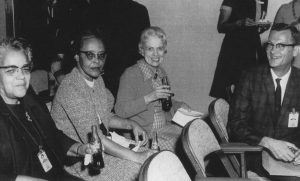 The breakout movie Hidden Figures tells the story of three African American women who worked as mathematicians at NASA. The story sheds light on the significant contributions of the three women—Katherine Johnson, Dorothy Vaughan, and Mary Jackson—but also the broader impact that women had behind the scenes at NASA.

Johnson, Vaughan, and Jackson all began their careers at the National Advisory Committee for Aeronautics (NACA)—which later became NASA—working as “computers.” Computers were not what we think of them today. They were people, primarily women, who reduced or analyzed data using mechanical calculators—we’ve previously explored the role of computers in astronomy.

The work of computers was largely invisible. Their names never appeared on reports. Still, there’s a lot we can learn about their work through primary sources. In an article for the Annals of the History of Computing, curator Paul Ceruzzi examines an astounding document; a memorandum dated April 27, 1942 that outlines the computing facility at the Langley Memorial Aeronautical Laboratory (LMAL), the main research facility of the NACA and where Johnson, Vaughan, and Jackson worked.

The memorandum, included below, was found in the files of the NASA Langley Research Center in Hampton, Virginia. The memo was written by R. H. Cramer, a representative from the Curtiss Aircraft Company at LMAL, to R. A. Darby, a Curtiss personnel manager. In it, Cramer describes how Curtiss might set up its own computing facility similar to the one he found at Langley.

In the 1930s and 40s Langley researchers primarily concentrated on the analysis of the aerodynamic properties of things like wing sections, propellers, and even whole airplanes. Engineers would begin their work by selecting a trial shape. They then built a scale model and placed that shape in a wind tunnel. In the tunnel, a battery of instruments measured its performance. The data from the test was then reduced and analyzed. Based on the results one parameter of that design was changed by a small increment and tested again. The steps were repeated until the performance was optimum for any given parameter. This method of repeated empirical testing required an enormous amount of computational work.