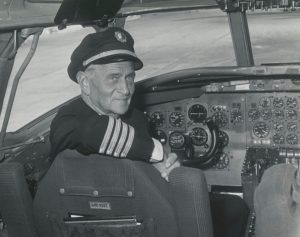 At the Shannon Air Museum, you can learn about legendary Captain Dick Merrill’s adventures as an airmail pilot for Pitcairn Aviation, a Captain for Eastern Airlines, and piloting the first round-trip trans-Atlantic flight!

Inducted in 1984, Harry T. “Dick” Merrill flew the airmail routes from Virginia in the 1920s and 1930s. He learned to fly just after WWI and amassed some 45,000 hours of flying time. He was best known in Virginia for his exploits flying the airmail for Pitcairn Aviation, which later became Eastern Airlines. He earned the coveted Harmon Trophy, was personal pilot to President Eisenhower, and set numerous flying records. He was curator of the Shannon Air Museum at the time of his death.

To read more about Dick’s adventures: