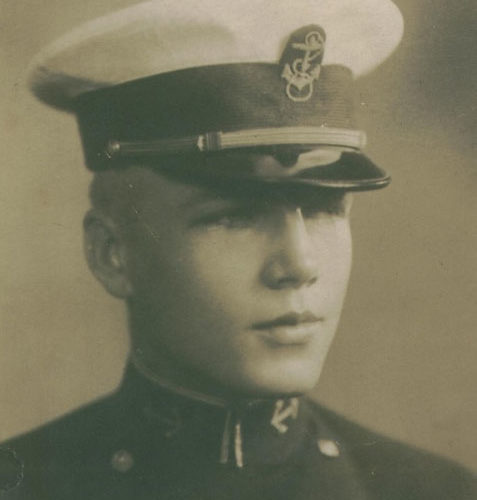 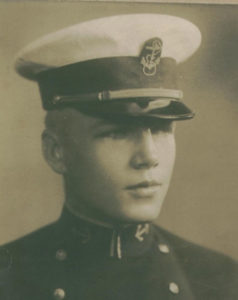 Captain Edward L. Anderson received his gold Naval Aviator wings in March 1941, transitioned into the Douglas SBD dive-bomber and reported aboard the USS Enterprise on June 2, 1941. Several days after the Japanese attack on Pearl Harbor, helped sink the Japanese submarine I-170 near the Hawaiian Islands – the first Japanese combatant ship sunk by the U.S. aircraft during WWII. He flew combat missions during the Marshall Islands Raid in February 1942 – the first offensive action by US forces in the Pacific War. From June 4th to June 6th, 1942 he flew combat missions along with other pilots from the carriers Hornet and Yorktown in the famous Battle of Midway. For his actions, he was awarded the Navy Cross and the Distinguished Flying Cross. From January 1944 to January 1945, he commanded Bombing Squadron 80 aboard the USS Ticonderoga and flew the SB2C. He received his second DFC while leading raids against the Japanese in the Philippines and was severely injured during two Kamikaze attacks while aboard the USS Ticonderoga. On July 1, 1968 he retired from the Navy after a 32-year career. Source: Virginia Aeronautical Historical Society Website

Edward Lee Anderson was born in Claremont, Virginia on 22 September 1914, son of Knut A. and Lena Elizabeth (Brockwell) Anderson. He attended Claremont High School and on 4 January 1932, enlisted in the US Navy. He served on board USS Chester, and in 1934 was appointed, at large, to the US Naval Academy, Annapolis, Maryland.  Graduated and commissioned Ensign on 2 June 1938, he subsequently advanced in rank, attaining that of Captain, to date from 1 July l956.

Following graduation from the Naval Academy in 1938, he joined the cruiser Brooklyn and in April 1939 was transferred to the destroyer Leary. Detached from that vessel in November 1939, he then reported as Communications Watch Officer on the Staff of Commander, Atlantic Squadron. From September 1940 until May 1941 he had flight training at the Naval Air Stations, Pensacola and Miami, Florida, and was designated a Naval Aviator in April 1941. Ordered to Bombing Squadron SIX, based on USS Enterprise, he was serving with that Squadron when the United States entered World War II on 8 December 1941.

For outstanding service in the attack on the Marshall Islands and during the Battle of Midway, he was awarded the Air Medal and the navy Cross, respectively. The  citations follow, in part:

Air Medal: “For meritorious conduct…in action with the enemy. As a pilot of the air attack group, he participated in the Marshall Islands attack, 1 February l942.  He attacked enemy ships and shore installations in the face of heavy anti-aircraft fire an obtained a direct hit on an enemy tanker…”

Navy Cross: “For extraordinary heroism and distinguished service as a Section Leader of Bombing Squadron SIX in action against enemy Japanese forces in the Battle of Midway, 4-6 June 1942.  Defying extreme danger from concentrated anti-aircraft fire and fierce fighter opposition, (he) with bold determination and courageous zeal, participated in dive-bombing assaults of our forces against Japanese naval units. On two occasions, ignoring the hazardous consequences of flying beyond range of his fuel capacity, he pressed home his attacks with cool disregard for his own personal safety. His gallant intrepidity and loyal devotion to the accomplishment of a vastly important mission contributed greatly to the success of our forces…”

In addition, he was awarded Gold Stars in lieu of the Second and Third Air Medals for completing ten strike missions in the Pacific War Area during the period 7 December 1941 to 19 April 1942.  He is also entitled to the Ribbon for and a facsimile of the Presidential Unit Citation awarded USS Enterprise and her Air Groups for heroic service during the early period of the war.

Detached from Bombing Squadron SlX in July 1942, he returned to the United States and was assigned duty as Chief Flight Instructor at the Naval Air Station, Jacksonville, Florida, with additional duty at Daytona Beach.

He remained there until January 1944, when he assumed command of Bombing Squadron EIGHTY, based on USS Ticonderoga.  “For heroism and extraordinary achievement…(in that command) in action against enemy Japanese forces in the Philippine Islands on 13 November 1944…” he was awarded the Distinguished Flying Cross. The citation further states:

“Maneuvering his strike group of twenty-two planes into position despite intense anti-aircraft fire from both ship and shore batteries, (he) led a dive on a Japanese light cruiser and personally succeeded in scoring a direct 1000-pound bomb hit on the target. His airmanship and devotion to duty were important factors in the sinking of an enemy vessel…”

He was also awarded Gold stars in lieu of the Fourth and Fifth Air Medals and a Gold Star in lieu of the Second Distinguished Flying Cross for completing five strike missions each in the Pacific War Area from 5 November 1944 to 15 January 1945.

In February 1945 he joined USS Card as Air Officer and a year later was detached for duty in the Air Intelligence Branch, Office of the Chief of Naval Operations, Navy Department, Washington, DC. He was assigned in January 1948 to the Intelligence Center on the staff of the Commander in Chief, US Atlantic Fleet, and from September 1949 to July 1950 served as Navigator and Air Officer of USS Midway. Detached from that aircraft carrier, he next had instruction at the Armed Forces Staff College, Norfolk, Virginia.

He returned to the Office of the Chief of Naval Operations, Navy Department, to serve from January 1952 until April 1954 in the strategic Plans Division. Then following a year’s duty on the staff of Commander Allied Forces, Southern Europe, at Headquarters in Naples, Italy, he reported as Executive Officer of USS Forrestal, attack aircraft carrier. When detached in July 1956 he reported to the National War College, Washington, DC, where he was a student until June 1957. He then became Assistant Head of the Air Weapons System Analysis Staff, Office of the Chief of Naval Operations.

In August 1959 he assumed command of the seaplane tender Onslow, and in February 1960 was ordered to duty on the Staff of Commander FIRST Fleet. On 16 June 1961 he became Commanding Officer of USS Franklin D. Roosevelt and in May 1962 was again ordered to the Office of the Chief of Naval Operations. There he served as Assistant Director of the Development Facilities, Astronautics and Ranges Division, until October 1963, when he became Director of that Division. In June 1965 he was ordered detached for duty on the Joint Staff, Commander in Chief, Continental Air Defense Command.

Captain Anderson is a member of the American Philatelic Society. 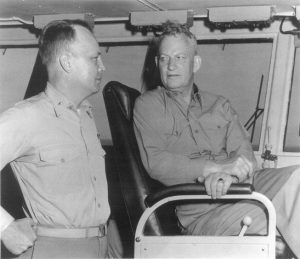 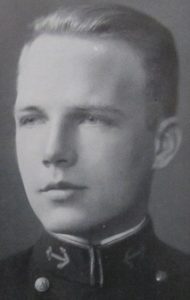 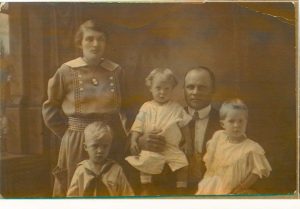 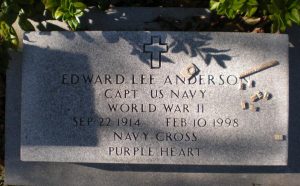