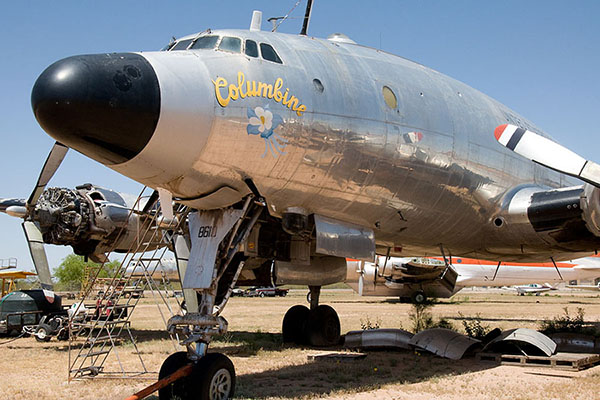 Giving the First Air Force One a Second Chance

Built in 1948, the Lockheed Constellation “Columbine II” was the first presidential aircraft to go by the call sign, “Air Force One,” indicating to air traffic control that the president was on board. Columbine II shuttled President Dwight D. Eisenhower around the globe, logging more than 50,000 miles in service to the president and other dignitaries including Vice President Nixon and Queen Elizabeth II.

Forgotten in the Desert
Dynamic Aviation chairman Karl Stoltzfus, Sr. learned that the Columbine II was for sale and at risk of being scrapped and repurposed. After thoroughly researching the venture, Dynamic Aviation purchased the plane, which had been stored in the Arizona dessert for nearly 20 years. After a year of heavy maintenance and repairs by Dynamic Aviation mechanics in Arizona, this national treasure was flown to Dynamic Aviation’s airpark in Bridgewater Va., in March of 2016 for further restoration.

New Life for an Old Plane
Dynamic Aviation’s legacy team is now hard at work refurbishing the aircraft to its 1950s grandeur. Using original drawings and documents, the plane is being meticulously restored to make it as authentic as possible, including original colors, fabrics and even marble used in its elegant interior.

We are proud to be giving the first Air Force One a second chance. Our goal is to preserve this important aircraft for future generations. For more information visit https://www.firstairforceone.com.