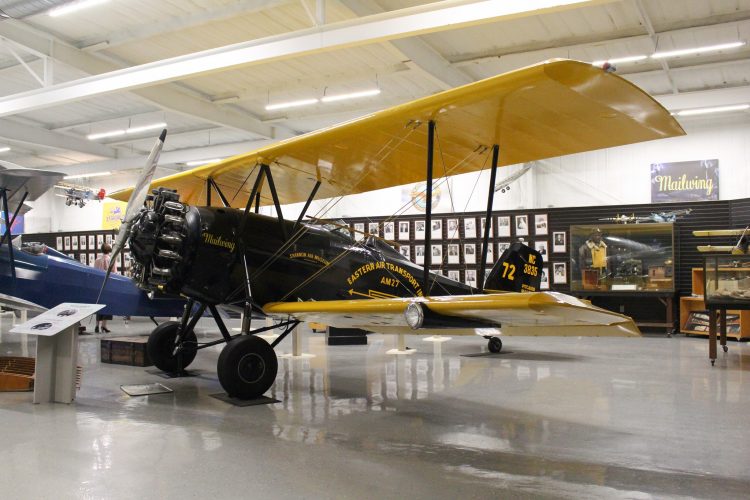 Flying antique airplanes can be absolutely delightful, but it can have, well, it’s moments.

Meade came aboard as assistant curator Feb. 1, 1977, and stayed three-and-a-half years. In that time he flew everything in the museum except the Standard E-1, a rare holdover from World War I.

Shannon had close ties to Eastern Airlines, then one of the nation’s largest carriers. His dad, Sid Shannon Sr., had been a vice president at Eastern, which had begun as a contract air mail line in the 1920s.

Young Shannon grew up around airplanes and one of the first of the early flying machines he acquired was the museum’s 1927 Pitcairn PA-5 Mailwing. It was rare in being a machine designed for the sole purpose of flying airmail.

Thus it was only natural that when Eastern planned a mega-celebration to commemorate their 50th anniversary in 1978, someone remembered Shannon had a flyable Pitcairn Mailwing and wrote it into the script for celebrations at cities along the east coast that had been stops on the early airmail route, culminating in Miami, Eastern’s home base.

In his memoir, “When Passion Was the Fuel,” Meade writes about preparations for the big undertaking, in which the Mailwing would be the center of attention from Newark to Miami, and at a number of interim stops.

Capt. Dick Merrill, legendary Eastern pilot and curator of the Shannon Air Museum, worked with Meade and Francis Clore, who had worked for Shannon for years, to get the vintage airmail plane in top shape for the prolonged celebrations.

Aside from careful maintenance, there were minor changes made, including a small wind-driven generator (visible today on the landing gear) and a basic radio.

Eastern-which was picking up the tab for the Mailwing’s participation in their party-wanted a “younger” plane to accompany Meade on the trip. They sent along Lou Davis in a Cessna 150.

“Lou would do the navigating and most of the radio work,” said Meade, which freed him from those chores.

Departing on May 1, the exact day marking the start of Eastern’s 50th year, Meade and Davis flew north to Trenton, N.J., where he met none other than Stephen Pitcairn, son of Pitcairn Aviation founder Harold Pitcairn and builder of the now rare Mailwings.                     .

Delighted to meet Pitcairn, Meade admired several of the Pitcairn types that Stephen had inherited from his father’s collection. The two struck up a friendship that lasted until Pitcairn’s passing, in 2008.

Elsewhere in his memoir, Meade writes of subsequent meetings with Pitcairn, who invited the Shannon Museum pilot to fly some of his early airmail planes.

On the southbound journey, there were stops at Washington’s National Airport, then Richmond and Greensboro, N.C. and others, with the little yellow-and-black biplane drawing much attention and news coverage everywhere it stopped.

Meade remembers that he actually carried mail in big canvas postal bags in the Pitcairn’s mail compartment, just as it had in the pioneering era, when Dick Merrill was one of the flyers at the controls. The plane could tote up to 500 pounds of mail in a covered bin where a front cockpit would have been on a conventional design of the era.

“One of the guests of honor at Greensboro was Louise Thaden,” Meade recalls, “(she was) an early aviatrix and winner of the 1937 Bendix Trophy Race, flying a Beechcraft Staggerwing. After dinner,” he said, “I found myself standing right by the front of the Mailwing, next to Louise.”

Thaden, who like Steven Pitcairn has also since died, was an exceptionally talented pioneer female flyer with many awards, trophies and firsts to her credit, including the Harmon Trophy-then aviation’s highest honor. And unlike many of her contemporaries, including Amelia Earhart, Thaden’s life did not end in an airplane.

Throughout their multi-stop flight to Miami, the venerable mail carrier drew crowds at every stop. In Miami, Eastern staged what may have been the largest celebration.

The Mailwing had performed flawlessly, according to Meade, and was the center of attention.

When the festivities ended, Davis and Meade turned their attention to getting home, departing northward for Virginia.

Meade picks up the tale here, which I’ve cut back a bit for length.

“We were planning a stop at Savannah, so we were navigating the easy way-following I-95. We were about 1,500 feet over the road; Lou was in the lead, as usual, and I was following along about half-mile behind.

“All of a sudden the cockpit filled with smoke and the engine lost power. I had no idea an open cockpit aeroplane could fill with smoke, but it certainly did.

“I slipped the aeroplane to clear the smoke, grabbed the microphone and said to Lou: ‘I’ve gotta go down.’ ”

Since he hadn’t been very high and the interstate was directly below-with light traffic, Meade did the logical thing and “I had no problem at all putting the ship just where I wanted it. I rolled to a stop, shut down what was left of the engine, got out, sat on the left main wheel and lit a cigar.”

Hard as it is to imagine in today’s I-95 traffic, Meade sat there about 10 minutes before anyone stopped.

“Here we were in the deep south and what was this cop’s name? It was Robert Lee. Robert A. Lee, and he was a private pilot.

With the trooper’s help, Meade found that the Pitcairn’s engine would run, but only slowly, just enough to move the plane.

“We decided to try to taxi the Mailwing up the highway to a small airport-Hopewell Plantation, which was just beside the highway,” Meade recalls.

The remainder of the story plays out about as one would imagine. The tired old Wright J5 had dropped a valve, which had punched a hole in a piston.

The kind folks at the small Georgia airport put the visitors’ valuable historic flying machine in a hangar, while the folks from Shannon Airport went home to get a trailer to carry it back to Virginia.

Back at Shannon, a replacement engine was installed on the plane, and it went back on display in the museum.

Although the engine had failed, the Mailwing had completed it’s mission, just as it had carried tons of mail in aviation’s pioneering days-faithfully.

Story credit: Paul Sullivan
Photo credit: Shannon Air Museum, The Pitcairn PA-5 was the first in the Mailwing series. It was designed to carry air mail and cargo. Pitcairn Aviation (the forerunner of Eastern Air Transport in Eastern Airlines) used 16 PA-5s to carry airmail on Contract Air Mail Route No. 19 between New York and Atlanta. These airplanes served seven cities, including Richmond, VA on the 792-mile route.