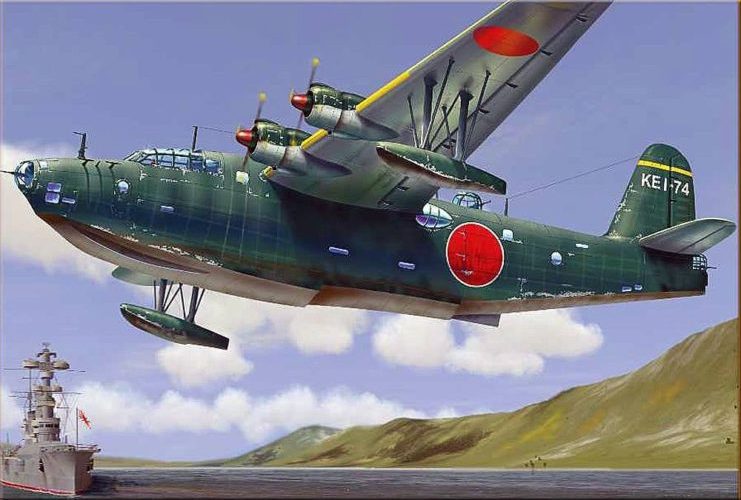 In this Dakota Hunter Blog, I will try to make a comparison between what arguably is considered as The best of WWII-operated US and Japanese Flying Boats:

In engine technology, major steps were made in the early 1930s, as the newly upgraded Radial engines from Pratt & Whitney and Wright arrived into the market with previously unseen HP/weight ratios, reducing the need for use of 3-4 engine setups (Similar to what we see now with the upgraded/ stretched 2-engine Wide Body Jet-airliners, pushing the 4-engine B-747/ A-380 Jetliners out of the market for pax flights).

The P & W R-1830 Twin Wasp 14 cylinder Radial engine cranked out some 1,000 hp and in later versions even 1,200 hp with extreme endurance and reliability. The engines could run/fly for well over 30 hours if only sufficient fuel was aboard. For the planned long overseas Flying Boat patrol and civil aircraft, that flight endurance/range became the new Holy Grail.

A wet dream for any Navy, to fly & spy over the oceans, with a swarm of mechanical Gulls, monitoring the endless seas with almost unlimited flight endurance and hopefully detecting one day the enemy fleet or a single Submarine, way before those vessels could launch an attack and inflict damage.

Not a contest for the “Most Exotic or Best Flying Boat“ but a brief comparison of the tech specs of both ‘boats, with their own Outstanding features, that earned them the title “Best flying boat of the Pacific”.

In Japan, there was a similar development for Long-Range Flying boats that started in or before 1934. Could it be that around that year, they may have had a master plan for conquering the “Colonial” Pacific?

Kawanishi incorporated in their design the knowledge collected after they visited the Short Brothers factory in the UK, at that time one of the world’s leading producers of flying boats (Industrial espionage is nothing new).

The result was the Kawanishi H3K, a license-built, enlarged version of Short’s Old-School design, the model Rangoon. Based on that type, a larger, 4-engine monoplane with twin tails came out, and a hull suspended beneath the parasol wing by struts, quite closely resembling the PBY wing setup. The maiden flight was on 14 July 1936 (just over a year after the maiden flight of the PBY) and was originally designated Navy Type 97 Flying Boat, later H6K. Read More