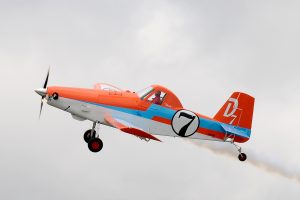 A plane with a lot of personality has joined the collection at the National Air and Space Museum — an Air Tractor AT-301 nicknamed Dusty Crophopper. The Air Tractor AT-301 and other “ag planes” were designed when aerial application became an essential part of farming. In 2013, at the request of Disneytoon Studios, owner Rusty Lindeman repainted this Air Tractor to match the paint scheme of Dusty Crophopper, an agricultural plane who longs to become an air racer in the animated film Planes and a firefighter in the 2014 sequel Planes: Fire and Rescue. A 2013 air show tour and the popularity of the two Disney films continue to demonstrate the specific roles and value of agricultural and fire-fighting utility aircraft. Lindeman’s donation of the aircraft is part of the commemoration of the 100th anniversary of agricultural aviation and was arranged by the National Agricultural Aviation Association.

You can see Dusty for the first time at our Innovations in Flight event. Learn more about our newest artifact.