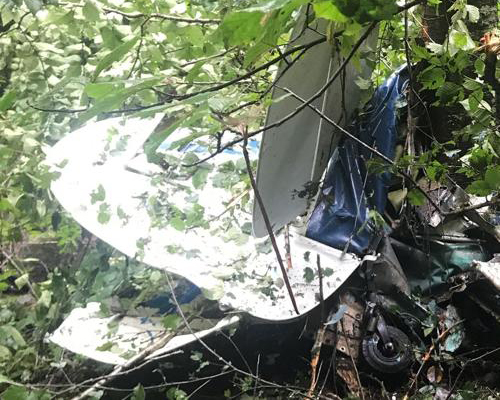 Nicholas Hellewell, 35, of San Luis Obispo, Calif., was the pilot who died in a small plane crash this week in a Rappahannock County section of Shenandoah National Park, officials announced Friday.

He was on a cross-country flying trip that started earlier this summer, according to his public Facebook page detailing daily flights with photos.

“For those that know me this crazy adventure should be of no surprise to you,” Hellewell posted June 25. “This summer I will be taking off on a cross country flying trip and trying to land at as many airports and states as possible. I’m sure I will be posting many photos along the way. Since all the family weddings and acro (dance) festivals have been canceled what better way to see all my friends and family than to fly.”

The single-engine, four-seater Piper PA-20-135 he was piloting crashed about 7 p.m. Monday, about a half-mile from Skyline Drive in the Buck Hollow Trail area, according to National Transportation Safety Board spokesman Peter Knudson.

The aircraft left from Maryland Airport in Indian Head, Md., he said. The airport is about 100 miles east of the crash site.

Hikers discovered the plane wreckage in a heavily wooded area about 11 a.m. Wednesday, and reported it to park officials, Knudson said. The pilot did not file a flight plan providing information about his intended destination or flight track, he said.

Hellewell’s plane, however, was outfitted with ADS-B Flight Tracking, Knudson said. The equipment sends out a signal every second with information on location and speed, according to the NTSB spokesman.

The wreck site is secluded and highly fragmented, Knudson said. “We may have to recover the wreckage by helicopter and that may take a little time to do,” he said Friday.

The weather was inclement at the time of the crash, rainy and cloudy, Knudson said. NTSB will release a preliminary report on the crash in about two weeks, but the final investigation could take up to two years.

Remaining closed to maintain a secure crash site and minimize disturbance during the investigation are: Buck Hollow Trail, including parking areas on U.S. Route 211 and Meadow Spring on Skyline Drive at mile 33.5, and the Buck Ridge Trail.

These areas will remain closed until the investigation is complete and the wreckage is removed from the scene, which will likely be early next week, according to a park release.

Nearby Hazel Mountain Trail and Meadow Spring Trail (which leads to the Appalachian Trail and the summit of Mary’s Rock) are not closed, but there will be no access to these trails from the Meadow Spring parking area.

Virginia State Police, Federal Aviation Administration and National Transportation Safety Board are assisting at the scene.

Hellewell’s final Facebook post talked about the latest leg of his trip: “Captains log star date 25656.37 made it safely into the DC SFRA (Special Flight Rules Area) without getting intercepted by the Air Force. 25 mile bike ride to downtown to finally get a tour of the monuments capital and White House. Finished off the evening with amazing beer friends and camping at the airport.”

Condolences were shared on social media including on Portland Acro on Facebook: “Nicholas Hellwell died yesterday piloting his plane over Virginia. Acro was such a passion for him. Many of you knew him from the countless festivals he attended in his crazy American flag attire. He pioneered the San Luis Obispo acro community and freely shared his knowledge.”

A family statement posted Thursday by Justin Costa stated: “It is with heavy hearts that we are writing the last Captains Log Star Date … for Nicolas Hellewell. Nicolas was on an adventure of a lifetime travelling the U.S. in his Piper PA-20 plane. On Tuesday, September 2, he died in a plane crash in Virginia. He made many stops along the way with family and friends. Please treasure the time you spent with him. He will be missed!”