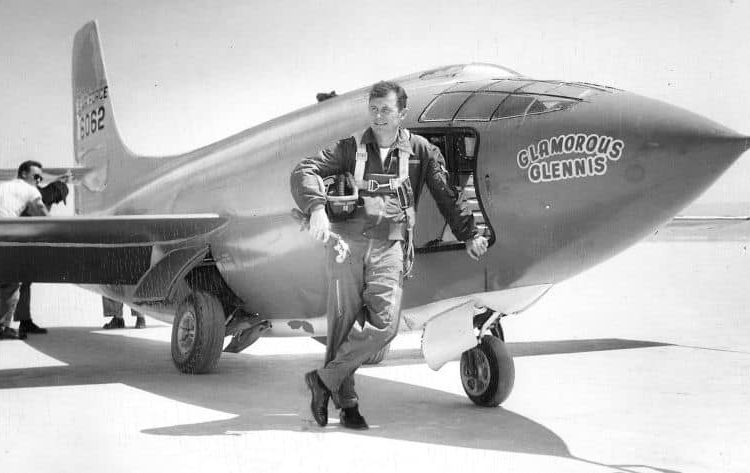 Chasing the Demon: Dan Hampton
NATIONAL BESTSELLER • At the end of World War II, a band of aces gathered in the Mojave Desert on a Top Secret quest to break the sound barrier–nicknamed “The Demon” by pilots. The true story of what happened in those skies has never been told.

Speed. In 1947, it represented the difference between victory and annihilation.

After Hiroshima, the ability to deliver a nuclear device to its target faster than one’s enemy became the singular obsession of American war planners. And so, in the earliest days of the Cold War, a highly classified program was conducted on a desolate air base in California’s Mojave Desert. Its aim: to push the envelope of flight to new frontiers. There gathered an extraordinary band of pilots, including Second World War aces Chuck Yeager and George Welch, who risked their lives flying experimental aircraft to reach Mach 1, the so-called sound barrier, which pilots called “the demon.”

Shrouding the program in secrecy, the US military reluctantly revealed that the “barrier” had been broken two months later, after the story was leaked to the press. The full truth has never been fully revealed—until now.

Chasing the Demon, from decorated fighter pilot and acclaimed aviation historian Dan Hampton, tells, for the first time, the extraordinary true story of mankind’s quest for Mach 1. Here, of course, is twenty-four-year-old Captain Chuck Yeager, who made history flying the futuristic Bell X-1 faster than the speed of sound on October 14, 1947. Officially Yeager was the first to achieve supersonic flight, but drawing on new interviews with survivors of the program, including Yeager’s former commander, as well as declassified files, Hampton presents evidence that a fellow American—George Welch, a daring fighter pilot who shot down a remarkable sixteen enemy aircraft during the Pacific War—met the demon first, though he was not favored to wear the laurels, as he was now a civilian test pilot and was not flying the Bell X-1.

Chasing the Demon sets the race between Yeager and Welch in the context of aviation history, so that the reader can learn and appreciate their accomplishments as never before.

In a compendium of reminiscences, photographs, and experts’ discussions, the surviving participants in the development and flying of the Bell X-1 rocket plane that broke the sound barrier in 1947 recount their experiences. 17,500 first printing.

From “America’s nerviest journalist” (Newsweek)–a breath-taking epic, a magnificent adventure story, and an investigation into the true heroism and courage of the first Americans to conquer space. “Tom Wolfe at his very best” (The New York Times Book Review)

Millions of words have poured forth about man’s trip to the moon, but until now few people have had a sense of the most engrossing side of the adventure; namely, what went on in the minds of the astronauts themselves – in space, on the moon, and even during certain odysseys on earth. It is this, the inner life of the astronauts, that Tom Wolfe describes with his almost uncanny empathetic powers, that made The Right Stuff a classic.

General Chuck Yeager was the greatest test pilot of them all—the first man to fly faster than the speed of sound . . . the World War II flying ace who shot down a Messerschmitt jet with a prop-driven P-51 Mustang . . . the hero who defined a certain quality that all hotshot fly-boys of the postwar era aimed to achieve: the right stuff.

Now Chuck Yeager tells his whole incredible life story with the same “wide-open, full throttle” approach that has marked his astonishing career.  What it was really like enaging in do-or-die dogfights over Nazi Europe.  How after being shot over occupied France, Yeager somehow managed to escape.  The amazing behind-the-scenes story of smashing the sound barrier despite cracked ribs from a riding accident days before.

The entire story is here, in Yeager’s own words, and in wondeful insights from his wife and those friends and colleagues who have known him best.  It is the personal and public story of a man who settled for nothing less than excellence, a one-of-a-kind portrait of a true American hero.

An intriguing portrait of the life of a rugged individualist covers everything from flying stunts and tales of travel to fishing advice, family stories, and a live-for-the moment philosophy

Young readers will love the legend of the great American aviator, Chuck Yeager, who grew up from humble beginnings to become the first person to fly a plane faster than the speed of sound. This beautifully illustrated book shows scenes of Chuck as a boy in rural West Virginia, describes his wild flights as a test pilot in the U. S. Air Force, and recounts the terrifying bumping and rattling flights as he neared the “sound barrier.” The book presents a chapter on what the sound barrier is and why it is so dangerous. The reader can experience, with Chuck, the beautiful moment of success as his rocket plane breaks through to supersonic speeds. Young people will remember always this heroic story and the legendary pilot who took the world of aviation into a new era. From Kirkus Reviews: “Engages young readers’ imaginations, respects their intelligence and takes them along on an exciting, real-life adventure . . . An excellent work of children’s nonfiction that just may inspire the next Chuck Yeager.” From Clarion Reviews: “Beautiful and vivid . . . a portrait of a very human Yeager, a man who was not only passionate and immensely knowledgeable about flying but also an individual who worked hard and overcame significant obstacles to reach his goal.”

In the Cockpit with Chuck Yeager is the first volume in Passion for Flight, a series of short biographies (20,000 words or less) regarding notable pilots who inspire young and old alike to take to the skies. Di Freeze interviewed Chuck Yeager for this short biography, and filled in facts with his autobiography, Yeager. Gen. Yeager reviewed and approved this approximately 11,000-word bio for accuracy. This is not meant to be a comprehensive history of Chuck Yeager’s life, but it contains the major milestones in his aviation history.

Brig. Gen. Charles Elwood “Chuck” Yeager was the first person to break the sound barrier, on Oct. 14, 1947. After being shot down during World War II and evading capture, he successfully fought a rule that banned shot-down pilots from re-entering combat and eventually became a double ace. In 65 years in military cockpits, he flew at least 340 different makes and models of military airplanes, including the Air Force’s entire inventory during World War II, as well as aircraft from Germany, France, England, Japan, Sweden and Russia.

In 1994, Yeager replaced actor Cliff Robertson as the chairman of the Experimental Aircraft Association’s Young Eagles program. Under his leadership, the organization accomplished the successful mission of getting one million youth to fly at the controls by Dec. 17, 2003, the 100th anniversary of the Wright brothers’ first flight. Yeager himself has personally flown more than 500 Young Eagles, and the foundation has given more than $50,000 for the Young Eagles General Chuck Yeager Scholarship Endowment Program. After accomplishing his mission, Yeager turned over the reins to Harrison Ford, in 2004.

Gen. Yeager and his wife Victoria incorporated the General Chuck Yeager Foundation in 2002. The foundation supports programs that teach “honor, integrity, courage and excellence in our daily conduct, a strong sense of public service and duty to our country, and an intellectual curiosity.”

Each year, millions of visitors flock to the Smithsonian National Air and Space Museum to look at the Bell X-1 aircraft-the vehicle in which Chuck Yeager broke the sound barrier on October 14, 1947. This in-depth look at the legendary aircraft tells the story of this momentous achievement-how the technology was developed, conflicts were resolved, and Yeager and his fellow pilots became the heroic figures depicted in The Right Stuff. A wealth of historical photographs of the Bell X-1 enriches the text, which includes such fascinating material as Yeager’s official memo about the historic flight. This is as close as readers will ever get to being inside the aircraft that paved the way for supersonic flight, thus ushering in the era of space exploration.

For more books on Amazon: https://www.amazon.com/s?k=chuck+yeager