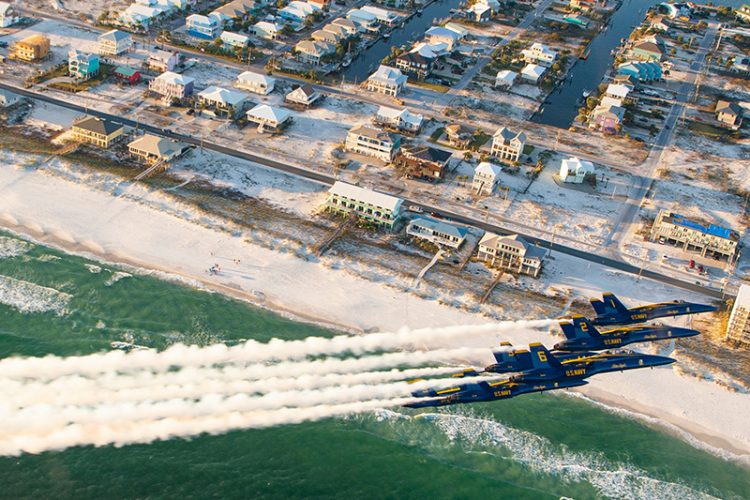 The U.S. Navy’s Blue Angels flight demonstration squadron conducted the last flight using its F/A-18 A/B/C/D Hornets on Wednesday, November 4, 2020. The aircraft, which the Blue Angels have flown for 34 years, will be replaced with F/A-18 E/F Super Hornets beginning with the team’s 2021 show season. The Hornets departed Florida’s Naval Air Station Pensacola at around 4 p.m. local time for a 30-minute flyover ranging from the Pensacola area to Alabama’s Fort Morgan.

“We are incredibly honored to have the opportunity to salute those teams who have flown, maintained and supported this platform for over three decades of service,” said U.S. Navy Blue Angels commanding officer and flight leader Cmdr. Brian Kesselring. “We deeply appreciate the expertise and operational knowledge Blue Angels past and present have brought to the team and we look forward to enhancing our operations as we fully transition to flying the Super Hornet.”

The Navy awarded Boeing a $17 million contract to configure nine F/A-18E and two F/A-18F Super Hornets for the Blue Angels in August 2018. Converting the aircraft for use by the team includes modifications such as an oil tank for a smoke-generation system, fuel systems that enable the aircraft to fly inverted for an extended period of time and civilian-compatible navigation equipment. The first of the new Blue Angels Super Hornets was delivered to Maryland’s Naval Air Station Patuxent River for flight testing and evaluation in June.