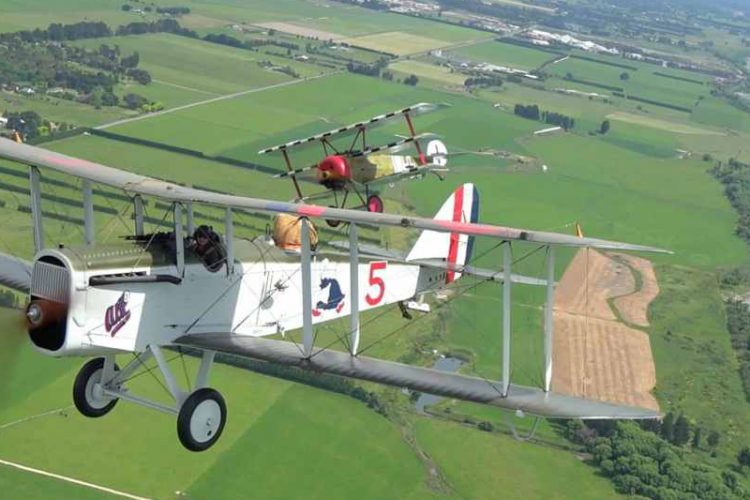 America entered World War One on the 6th April 1917, and surprisingly, she did so without owning a single combat-worthy aircraft. Not only that, but the aircraft production industry in the US was also seriously under-prepared for war, and there were not even any American designs for combat aircraft on the drawing board.

The only answer that would allow for the rapid expansion of the air combat wing was to build aircraft that were already being produced in Europe, under licence. The selected candidates were the French Spad XIII, and the British designed R.A.F. S.E.5a, the Bristol F.2b and the de Havilland (Airco) D.H.4.

Initially the US auto industry repurposed itself to build thousands of new combat aircraft for the war effort, convinced that the might of American industrial strength would be able to rise to the challenge. Unfortunately, the industry soon learned that the manufacture of aircraft was not quite as simple as that of automobiles, and despite the fact that France had asked for 8000 aircraft to be delivered by May 1918, only several hundred were actually shipped to Europe by that date.

Of the four aircraft designs selected for production, the DH-4 was the only US-built aircraft to reach the front lines before the end of the war in November 1918. A total of 8,500 DH-4s were ordered, but only 4846 were completed before the war’s end, and only around 1200 of these were delivered to the front lines in France. Despite the fact that the original design, the Airco-built DH.4, first entered service with the Royal Flying Corps in 1916 and was ostensibly obsolete by 1918, the DH-4 remained in service in the USA until 1932, which was an incredibly long-service life for an aircraft at the time.

The type was dubbed the “Liberty Plane” and it went on to serve with thirteen Army Air Service squadrons, of which five were full-blown bomber units, while the remainder undertook reconnaissance and observation duties. As a light bomber the aircraft could carry a payload of 908lbs (412kg), and when operating as a photo reconnaissance aircraft it could usually defend itself well with its twin Lewis guns in the rear cockpit, and twin forward firing Marlin or Browning machine guns on the forward fuselage. It was not the greatest bomber of the First World War (that epithet is often reserved for the type’s successor, the Airco DH.9a), and it was by no means a fighter aircraft, but it was nevertheless the first of many solid and reliable American-built combat aircraft produced in large numbers.

With so many newly built examples of the type still in America at the end of the war, the US Government could see no point in returning those DH-4s in France to the US. Most of those aircraft, along with other obsolete types were simply burned in what became known as the Billion Dollar Bonfire.

The Government was reluctant to continue spending money on the Air Service after the war. With the lack of new aircraft designs being made available, the existing fleet of DH-4s were retained and underwent many different conversions. Some of these were functional. Examples included night flying variants and those with automatic camera equipment, while others were purely experimental with different engines, and in one case DH.9 wings.

Many of the war surplus DH-4’s also found their way into civilian use, being converted and used for passenger transport. Most famously for the fledgling post-war transcontinental Air Mail Service. These aircraft had a watertight mail compartment fitted in place of the forward cockpit, and the pilot was moved to the rear cockpit.

The DH-4 Kickstarted Careers of Famous Aviators Doolittle and Lindberg

Many pilots began their civilian careers flying DH-4s, including a number of pilots who were to go on to acquire national fame such as Jimmy Doolitttle who flew the first non-stop flight across the transcontinental USA in 1922 and Charles Lindberg who made the first solo flight across the Atlantic in 1927.

—
Story credit: https://www.avgeekery.com/americas-first-combat-aircraft-and-the-beginning-of-the-us-aero-industry/
Photo credit: THE DH-4 IS ATTACKED BY A GERMAN FOKKER DR.1 DREIDECKER (TRIPLANE). ANY ENEMY PILOT GETTING THIS CLOSE TO THE AIRCRAFT IN COMBAT WOULD SURELY FEEL THE FULL FORCE OF THE GUNNER’S TWIN LEWIS MACHINE-GUNS. PHOTO COPYRIGHT © HISTORICAL AVIATION FILM UNIT.