The dead speak to Mary Buckingham Lipsey. None more loudly than Dr. William Wallace Whitney Christmas, who was either an unsung pioneer of early aviation or a crackpot inventor whose winged creations killed anyone who flew them.

Our story begins in a graveyard. Lipsey is active in Fairfax County cemetery preservation efforts. She was researching the Ions family plot in Fairfax Station, Va., when she learned that the family’s farm was reportedly the site of an airplane flight in 1908.

Lipsey had never heard of the man who designed and flew that plane, a medical doctor named William Christmas.

“Being the retired history teacher, I get a thread, and I keep pulling,” said Lipsey, 70, who taught at Lake Braddock Secondary School. 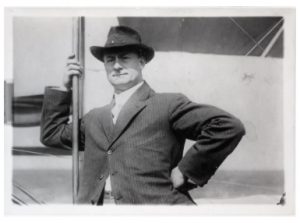 Christmas holds an airplane strut, probably of a biplane, in 1912. The doctor and inventor claimed to have flown a plane in Fairfax County, Va., in 1908. (Smithsonian National Air and Space Museum)

The result is “A Christmas Flight: Aviation Pioneer Dr. William Christmas,” a book Lipsey published in 2013. She also tells Christmas’s story in 2018’s “Aviation: From Curiosity to Reality.”

Christmas was born in North Carolina in 1865. He moved to Washington with his family as a teenager. He studied electrical engineering and tinkered with inventions. (One of his earliest patents was for an artillery shell equipped with blades designed to mince the enemy.) Eventually, he earned his medical degree.

Like many scientifically minded people of that era, Christmas was infatuated with heavier-than-air flight. He studied birds and decided flexible wings were the key to slipping the surly bonds of Earth.

Christmas claimed that in early March 1908, he flew an airplane of his design on the farm of Robert Ions, who delivered a deposition in support of the claim. That would make Christmas the third American to fly, after the Wright brothers.

Christmas said that after the successful flight, he burned the airplane, lest it fall into the hands of competitors.

In 1910, Christmas was able to secure hangar space at the hotbed of U.S. aviation research: College Park Airport. He incorporated the Christmas Aeroplane Co. and welcomed investors. After a few years in Maryland, he moved his operation to New York, testing airplanes on Long Island. 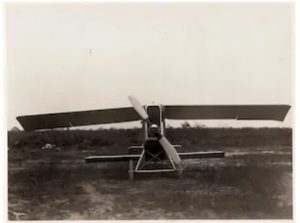 In 1918, Christmas began building his most notorious airplane. At a time when most planes had two wings, held in place with a lattice of struts and wires, the aircraft he called the Christmas Bullet had a strutless upper wing and a vestigial lower wing, similarly unbraced.

On Dec. 30, 1918, a pilot named Cuthbert Mills took the controls. A headline in the next day’s New York Sun described the result: “Flier Cremated on Landing After Losing Wing Aloft.”

A new version of the Bullet was built, and four months later, Christmas persuaded Allington Jolly, an aviator who had recently returned from World War I, to test it. The same thing happened. A wing fell off, and Jolly was killed.

Despite the setbacks, Christmas kept himself in the news. He said that he had invented a plane that could carry 40 passengers to Europe in 24 hours — and that he’d already sold tickets. He said he invented an explosive he dubbed “Christmatite,” second only to atomic fission in power.

Christmas received some unwanted attention in 1921 when the Ku Klux Klan attempted to start its own air force. A New York City address for the Klan’s Knights of the Air was the same as Christmas’s company. Christmas claimed it had been used without his knowledge.

Lipsey’s biography compiles many details of the doctor’s long and varied life, including how in 1940 Secretary of War M.H. McIntyre wrote that Christmas “veers more toward the nut than toward the genius.”

She knows Christmas is an object of derision online but believes much of the scorn is unwarranted.

“The Internet says he was never a doctor,” she said. “I’ve got the George Washington University annual where he received his degree.”

And if Christmas is unknown today, she said, it’s because “the big boys club” — Orville and Wilbur Wright, Glenn Curtis and others — conspired to keep him out. Lipsey said Christmas fought and won a patent battle over the invention of the aileron, a hinged surface on wings used to control balance.

Christmas outlived his naysaying peers, dying in 1960 at the age of 94. Lipsey nominated him for the Virginia Aviation Hall of Fame, but so far, the Virginia Aeronautical Historical Society has declined to induct him.

“I think the good Dr. Christmas is an example of the less admirable side of human nature,” said Peter Jakab, chief curator at the National Air and Space Museum.

Jakab said Christmas employed a not-uncommon method of aggrandizing himself: “If you tell a lot of lies, people sort of think there must be something true in there.”

I told Lipsey that the Smithsonian’s early-flight expert didn’t think much of Christmas.

“That’s why I’m his supporter, to get people to where they can make up their own minds about him,” she said.