A Taste of Taildraggers: Will flying with a tailwheel make you a better pilot?

A Champion 7ECA Citabria was my first taildragger as well as my first airplane. The first few hours of tailwheel instruction chronicled in my logbook made the score pretty clear—Citabria: 2, me: 0. My instructor always managed to add colorful comments to my logbook to illustrate the at-times-agonizing progress—”Crash and Dash,” he called many of our sessions. But by hour three, my grasp on runway dancing improved once I realized I’d been letting the little Champ lead me around on the ground rather than the other way around.

That checkout eventually taught me the value of subtle inputs to an airplane’s flight controls. Being able to understand what the airplane—any airplane—is telling me through the vibrations I felt and the noises I heard is a skill I don’t take lightly, especially in an era of general aviation cockpits chock-full of labor-saving automation. By the time I’d logged 100 or so hours in the Champ, I felt confident handling the rudder dance my taildragger demanded, even in relatively strong winds. My airplane infused me with a deeper understanding of the fundamentals of flying, like the need to manage an attitude, an airspeed and a flight path, habits that remain with me 40 years later.

“Why bother with the extra efforts of a taildragger?” It’s a question my nosewheel-trained friends often ask. Even during my early training, as wildly zigzaggy as it became at times, I never thought of my efforts as work, but really more of a challenge—one I willingly accepted because it seemed a natural progression to my role later in life as a professional pilot. 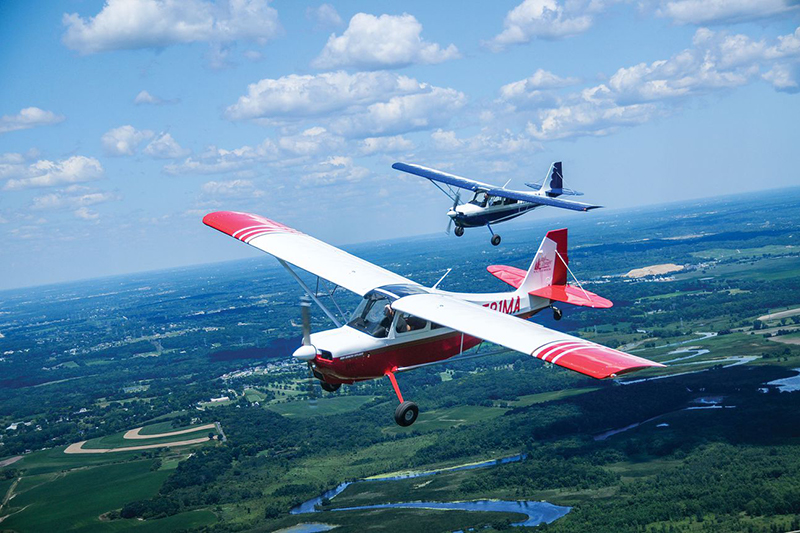 But the desire to understand the airplane beyond minimum standards is not the only reason to spend some time with one of these machines. Plenty of people today are buying CubCrafters and Aviat Husky tailwheel airplanes that demand these skills. As an instructor, I also initially took it for granted that pilots knew how to move their feet on the rudder pedals when necessary. Aircraft builders that added links between the rudders and ailerons to help counteract adverse yaw haven’t helped improve a pilot’s understanding of the messages their airplanes are trying to send them.

In a September 2015 Taking Wing installment in Flying, columnist Sam Weigel wrote: “Every landing [in a taildragger] is a challenge when you fly an airplane with fundamentally unstable ground handling. Flying taildraggers gives you instant street cred, a presumption of competence that opens up new opportunities.” 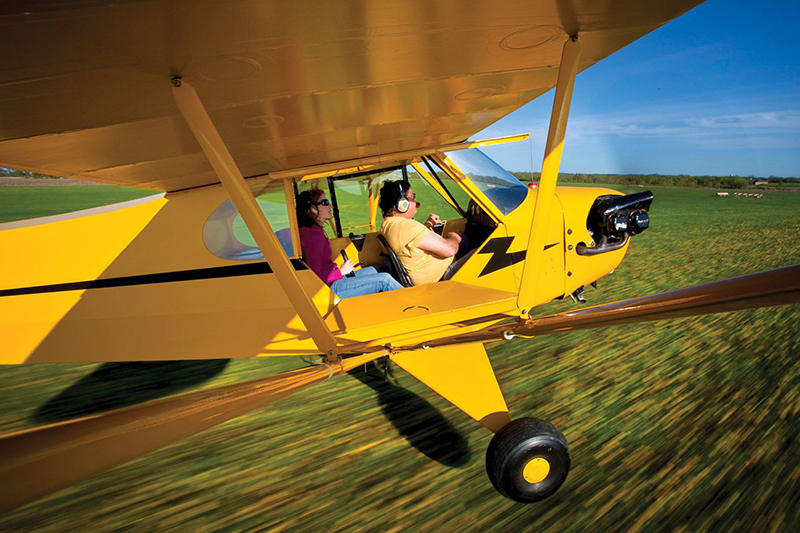 No doubt, learning to fly a taildragger—even when you’re able to practice regularly—can easily become a humbling experience for the complacent pilot.Courtesy Ladies Love Taildraggers

A Little Ground School
The challenge begins by understanding that the center of gravity is what sets tailwheel and tricycle-gear airplanes apart. The CG is an airplane’s balance point where the vertical, horizontal and longitudinal axes all meet. In a tricycle-gear airplane, with a nosewheel, that CG sits along the longitudinal axis in front of the main landing gear roughly halfway back from the nose. That’s why the nosewheel wants to quickly fall forward on its own after touchdown. Once down, that nosewheel handles most of the steering chores.

On a taildragger, the main landing gear sits much farther forward, with the CG just behind it, making the airplane far less forgiving of sloppiness in airspeed, flight-path and flight-control movement—and hence the airplane’s manners during ground maneuvers. Throw in a crosswind, and the efforts needed to keep the airplane headed where you want it are magnified.

Imagine a weather vane stuck on a poll. Because of the vane’s CG, even the mildest breeze makes the front of the vane—or airplane—try to point into the wind. Now imagine taxiing a taildragger pointed straight north with a wind from the west. The weather-vane effect tries to align the airplane with the wind, a dandy trait for a weather vane, but for an airplane, not so much. That translates into the compulsion for the pilot to constantly use the rudder pedals, creating the often cursed “rudder dance.”

The trick is to lead the rudder movement to remain planted on the centerline—a little right rudder, then a little left, and back and forth in hopefully smaller bites, in less of a dance than a coordinated series of inputs. Tailwheel pilots also learn to treat their brakes gingerly. Stomp on them during any kind of forward movement and the airplane could go over on its nose—or even its back. Aircraft with a castering nosewheel that demands active rudder control can give pilots a small taste of taildragging. 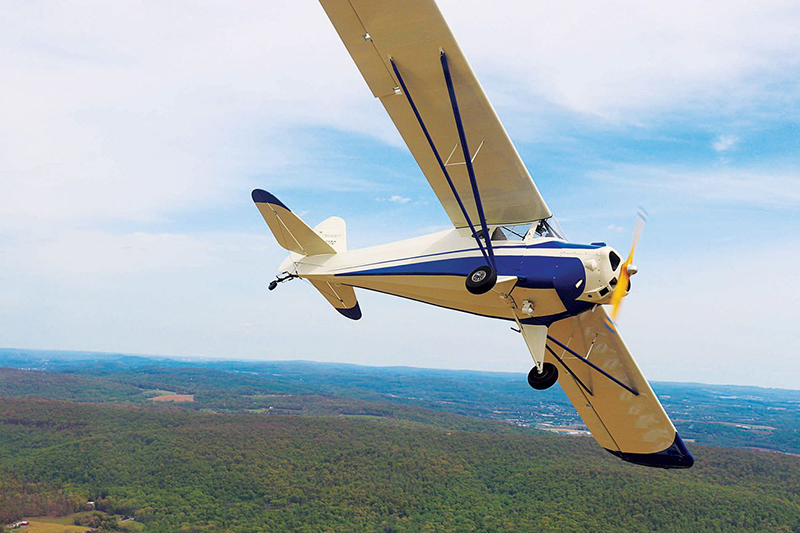 “Without a doubt, the best training, confidence booster and skills builder imaginable for handling planes on or near the runway.”Courtesy Ladies Love Taildraggers

Because the nose of a taildragger is already pointing skyward on the ground, it’s sometimes impossible to see ahead to taxi. The only solution, other than adding a pillow beneath the pilot, is to “S” taxi, looking out each side window as the aircraft turns. The trick here is to taxi a tailwheel airplane slowly.

That nose-high attitude also adds a built-in angle of attack, making taildraggers more susceptible to the wind. A few hours of instruction in a moderate wind quickly teaches pilots the importance of remembering where to place the flight controls to prevent surprise movements on the ground. The FAA’s Airplane Flying Handbook says, “The best approach is to understand that tailwheel aircraft are not damaged from the use of too much rudder, but rather from rudder inputs held for too long,” hence the need to practice that rudder dance.

Once a pilot becomes comfortable taxiing a taildragger while correcting for the wind, landing and takeoff won’t seem all that different, at least when it comes to flight controls. On takeoff, the pilot should slowly add power and expect the airplane to try and turn to the left on the ground, thanks to a more pronounced P-factor with that nose up in the air. A tailwheel pilot is ready with right rudder, but not too much. As the airplane gains speed and begins turning right, the pilot must be ready with a little less right rudder and possibly some left. Back and forth it goes while at the same time, with that blast of air across the tail, the elevator quickly becomes effective. The pilot soon nudges just a little forward pressure on the stick or wheel and raises the tail, a move that instantly increases the pilot’s visibility over the nose. Dance the rudders and, at the proper speed, ease the stick back slightly, and you’re flying. Now this becomes like flying any other airplane. 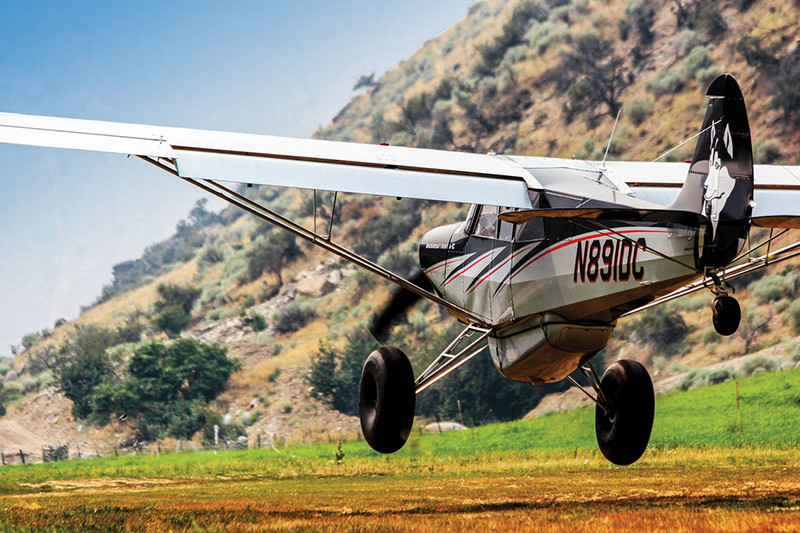 Don’t get too bogged down in all the details of what to do or not do in a taildragger, though. When all is said and done, flying one of these airplanes is a whole heck of a lot of fun too.Courtesy Ladies Love Taildraggers

On landing and takeoff, tailwheel pilots quickly learn just the right mixture of aileron, rudder and elevator during a crosswind, as well as touching down or lifting off on the upwind wheel to keep the airplane pointed straight down the centerline. For landing, there’s a full stall, or three-point landing in a taildragger, as well as wheel landings that keep the tail in the air as the aircraft slows.

In a three-point, the airplane is pretty much finished flying by the time the airplane touches down simultaneously on all three wheels. In the faster wheel landing, the pilot has more positive control, touching down on just the mains first. The trick there is to feel the tail running out of effectiveness and gently lowering it to the ground. After 700 to 800 hours in the Champ, I found I brought a serious respect for the use of the rudder during crosswind operations to each successively larger aircraft I flew.

The Payoff
There are rewards for the pilot who devotes the time to understand these tailwheel creatures. There’s the more precise movement of the flight controls that comes from taildraggers, something I’d almost forgotten until I earned a commercial seaplane rating a few summers back. Seaplane flying, like flying a taildragger, is all about precise movements on the rudder, the ailerons and, most of all, the elevator. After a few water takeoffs, the need for gentle yet firm pitch control came flooding back to me, and just enough forward movement on the stick made the little Cub on floats I was flying begin to slide across the surface of Silver Lake in Traverse City, Michigan.

No doubt, learning to fly a taildragger—even when you’re able to practice regularly—can easily become a humbling experience for the complacent pilot. That’s probably why the FAA demands that currency in a tailwheel airplane must include full-stop landings. 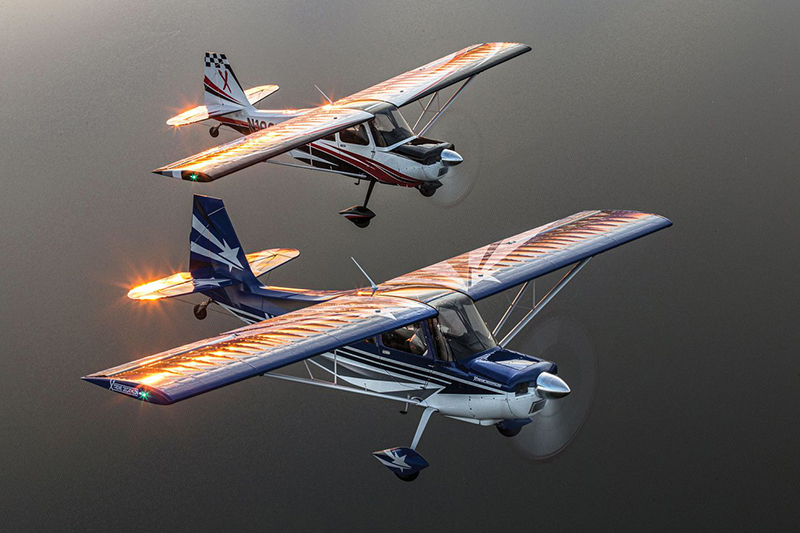 No doubt, learning to fly a taildragger—even when you’re able to practice regularly—can easily become a humbling experience for the complacent pilot.Courtesy Ladies Love Taildraggers

No introduction to tailwheel airplanes would be complete without mentioning groundloops, a notoriously uncontrolled maneuver lying in wait for any pilot who fails to remember their tailwheel basics. I remember my checkout in a Cub years ago with another instructor who insisted on demonstrating the first landing from the back seat. No sooner had we touched down than the little Piper headed 30 degrees to the left of the centerline and, before either of us could stop it, had run over a runway light before spinning around on one wheel to a stop. In addition to the other instructor’s embarrassment came the expensive belly damage that grounded the airplane for a month.

Maybe all this tailwheel training really translates into a heightened sensitivity to what’s needed to fly an airplane safely. Crosswinds no longer worry me, not because I think I can handle anything that comes along, but because I’ve well learned the importance of knowing when to head for another airport where the wind is more manageable rather than risk a runway excursion.

Never stop flying a tailwheel airplane, from the moment the engine spins over until you shut down on the ramp. That’s worthy advice for any pilot, but it comes with a special understanding for those of us who fly taildraggers. Don’t get too bogged down with all these taildragger rules here, though. Flying these airplanes is a whole heck of a lot of fun too.

This story appeared in the August 2020 issue of Flying Magazine