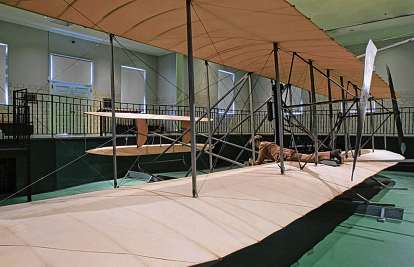 A piece of flight history set to fly again – on Mars

A piece of flight history set to fly again — on Mars
Material from wing of Wright Flyer I is part of rotorcraft on mission.

By Thomas Gnau
Staff Writer
ONLY IN THE DAYTON DAILY NEWS

A small piece of Wright brothers history is on Mars, being readied for another historic flight — this time, on the red planet’s surface.

A swatch of material from the 1903 Wright Flyer will be attached to a new rotorcraft that NASA hopes to free from its Mars Perseverance rover no later than April 8.

In more than 100 years, the cloth has traveled from Ohio to North Carolina, back to Ohio and now to Mars.

This work with the rotorcraft will be not only NASA’s first attempt at flying the four-pound craft — but its first attempt overall at powered, controlled flight of an aircraft on another planet.

“Wilbur and Orville Wright would be pleased to know that a little piece of their 1903 Wright Flyer I, the machine that launched the Space Age by barely one quarter of a mile, is going to soar into history again on Mars!” Amanda Wright Lane and Stephen Wright said in a statement provided by Kress.

The piece of muslin was part of the craft that achieved the first powered, controlled flight, on Dec. 17, 1903, above the dunes of Kill Devil Hill in North Carolina. Dayton’s Orville and Wilbur Wright covered 120 feet in 12 seconds in that first flight. (Orville, having won a coin toss, actually was airborne first. The brothers took turns flying after that.) The Dayton brothers made four flights that day, each one longer than the previous.

The brothers went on to refine controlled flight above Huffman Prairie northeast of Dayton, on land today controlled by Wright-Patterson Air Force Base.

Kress said Wednesday that Dayton History has had a relationship with NASA for decades. “They called and gave us an opportunity to take part. So we were thrilled with the idea.”

NASA was looking for some kind of Wright Brothers-related object that was “very, very light and really small,” Kress said. NASA also wanted to be sure not to introduce any biological agents to Mars, so the fabric had to be analyzed.

After the onset of the pandemic last year, there was “radio silence” from NASA, and Kress was unsure whether plans for the Mars mission had changed.

“To our delight, they rocketed the thing to Mars,” Kress said.

The fabric not only flew above sandy North Carolina beaches, it was also stored in a Wright family shed on Hawthorn Street in Dayton. It had been “saturated” during the 1913 flood that ravaged so much of Dayton and the Miami Valley, Kress noted.

The fabric has been a “silent witness” to plenty of Dayton and national history, he said. “We have more of it. We have pieces of it that were gifted to the Wright family decades ago.”

According to NASA, insulative tape was used to wrap the small swatch of the Wright Flyer fabric around a cable located underneath the Mars helicopter’s solar panel.

The Wrights used the same type of material — an unbleached muslin called “Pride of the West” — to cover their glider and aircraft wings beginning in 1901, the Associated Press noted.

NASA’s Apollo 11 crew flew a different piece of the material, along with a small splinter of wood from the Flyer, to the moon and back to Earth in Apollo 11’s July 1969 mission.

—
Story credit: Dayton Daily News, https://epaper.daytondailynews.com/
Photo credit: Fabric from the Wright Flyer I, similar to what was used on the Wright Flyer III at Carillon Historical Park, is on Mars waiting to fly again. CONTRIBUTED BY SKIP PETERSON