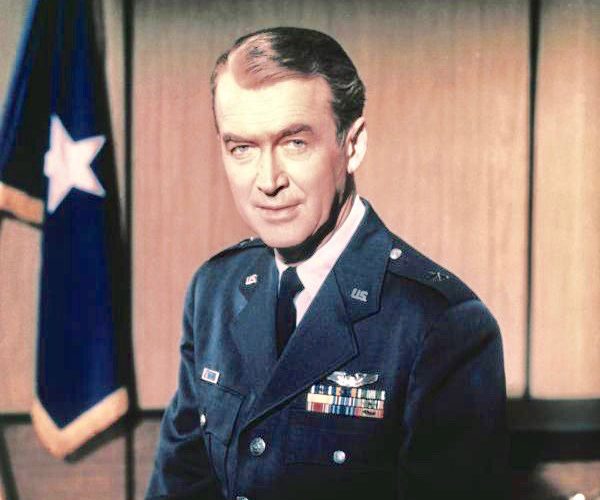 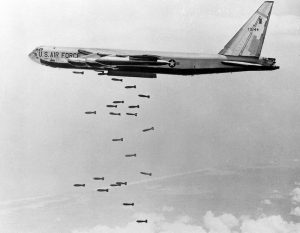 Jimmy Stewart was a successful Hollywood actor. He had an interest in aviation since childhood, and he earned a private pilot license in 1935, then upgraded to a commercial license in 1938. He owned his own airplane, a Stinson 105, and frequently flew it across the country to visit his family. 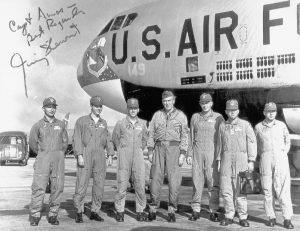 Stewart enlisted as a private in the United States Army 22 March 1941, just three weeks after winning the Academy Award for Best Actor for his performance in “The Philadelphia Story.” Military records show that he had brown hair and blue eyes, was 6 feet, 3 inches tall, and weighed 145 pounds (65.8 kilograms).

Because of his college education and experience as a pilot, Corporal Stewart was commissioned as a second lieutenant in the Army Air Corps, 19 January 1942. He was assigned as an instructor pilot at Mather Field, near Sacramento, California.

Stewart was promoted to first lieutenant 7 July 1942. Stewart was next assigned as a pilot at the Bombardier School at Kirtland Army Air Field, Albuquerque, New Mexico.

After transition training in the B-17 Flying Fortress, Lieutenant Stewart was assigned as as an instructor at Gowen Field, Boise, Idaho. On 9 July 1943, Stewart was promoted to captain and given command of a training squadron. 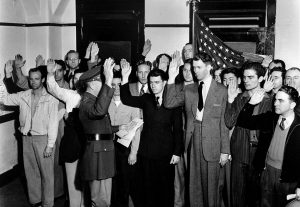 Concerned that his celebrity status would keep him in “safe” assignments, Jimmy Stewart had repeatedly requested a combat assignment. His request was finally approved and he was assigned as operations officer of the 703rd Bombardment Squadron, 445th Bombardment Group, a B-24 Liberator unit soon to be sent to the war in Europe. Three weeks later, he was promoted to commanding officer of the 703rd.

The 445th Bombardment Group arrived in England on 23 November 1943, and after initial operational training, was stationed at RAF Tibenham, Norfolk, England. The unit flew its first combat mission on 13 December 1943, with Captain Stewart leading the high squadron of the group formation in an attack against enemy submarine pens at Kiel, Germany. On his second mission, Jimmy Stewart led the entire 445th Group.

On 20 January 1944, Stewart was promoted to major, and served as deputy commander of the 2nd Bombardment Wing during a series of missions known as “Big Week.” He was awarded the Distinguished Flying Cross. 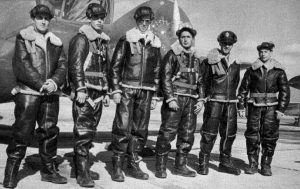 First Lieutenant James M. Stewart, USAAF, (third from left) as a pilot at the Training Command Bombardier School, Kirtland AAF, Albuquerque, New Mexico, 1942. (U.S. Air Force) Update: The first student on the left has been identified as John M. “Jack” Drenan. 1st Lieutenant Drenan, a B-24 bombardier, was listed as Missing in Action on a mission to the Marshall Islands, 2 January 1944. Thanks to Mr. Patrick E. Freudenthal for the information.

Major Stewart was next assigned as Group Operations Officer of the 453rd Bombardment Wing at RAF Old Buckenham. He assigned himself to fly the lead B-24 in the group’s missions against Germany until he was promoted to Lieutenant Colonel, 3 June 1944, and assigned as executive officer of the 2nd Bombardment Wing. In this position he flew missions with the 445th, 453rd, 389th Bomb Groups, and with units of the 20th Combat Bomb Wing.

After being promoted to the rank of Colonel on 29 March 1945, he was given command of the 2nd Bombardment Wing. He had risen from Private to Colonel in four years. He received a second Distinguished Flying Cross and was presented the Croix de Guerre avec Palme by France.

Following World War II, Jimmy Stewart remained in the U.S. Army Air Forces as a Reserve Officer, and with the United States Air Force after it became a separate service in 1947. Colonel Stewart commanded Dobbins Air Reserve Base, Marietta, Georgia. In 1953, his wartime rank of colonel was made permanent, and on 23 July 1959, Jimmy Stewart was promoted to Brigadier General.

During his active duty periods, Colonel Stewart remained current as a pilot of Convair B-36 Peacemaker, Boeing B-47 Stratojet and B-52 Stratofortress intercontinental bombers of the Strategic Air Command. 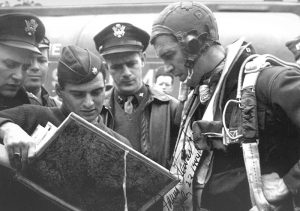 James Stewart was one of America’s most successful film actors. He made a number of aviation films , such as “No Highway in the Sky,” “Strategic Air Command,” “The Spirit of St. Louis”and “The Flight of the Phoenix.”

General Stewart retired from the U.S. Air Force on 1 June 1968 after 27 years of service.

Jimmy Stewart died of a heart attack at his home in Beverly Hills, 2 July 1997, at the age of 89 years. He is buried at the Forest Lawn Memorial Park, Glendale, California.