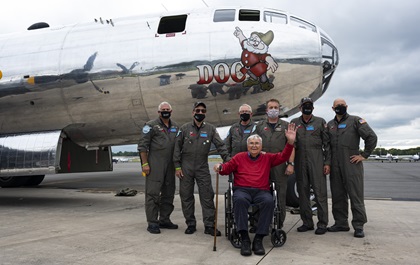 Vaucher flew 117 combat missions during 46 months of service, and was awarded two Distinguished Flying Crosses, among other decorations. Vaucher the “show of force” formation of 525 B–29s that flew over the Japanese surrender ceremony aboard the USS Missouri on September 2, 1945. Decades later, he was chosen to serve as honorary air boss for the Arsenal of Democracy 75th World War II Victory Commemoration Flyover that was to have included 70 aircraft passing in waves over the nation’s capital to honor of the seventy-fifth anniversary of the end of World War II.

Ragged, low ceilings; mist; and an occasional glimpse of blue sky taunted the pilots and crews of lovingly restored aircraft. They had all toiled at airports around the nation’s capital for the better part of a week leading up to the planned event, practicing the formations that would re-create a show of force for 2020, formations of aircraft arranged to celebrate their respective military roles, one following the next over the National Mall.

For many, the gathering at Manassas Regional Airport/Harry P. Davis Field and Culpeper Regional Airport was a labor of love. The days leading up to the planned flyover were an intense mix of aircraft maintenance and proficiency flights, pilots perfecting their formations of historic flying artifacts.

Crews alternated between practice runs and oil changes. Wax and polish were the order of the day as aluminum skin and military paint schemes were buffed to a fine luster that would have reflected the sun—if it could be seen through the clouds. Though mechanical issues are routine, finding parts for airplanes that rolled off the factory floor eight decades ago challenged maintenance teams until nearly the last minute.

A bad magneto in one of the four Curtiss-Wright radial engines temporarily grounded the Boeing B–17 Flying Fortress Sentimental Journey. It rumbled to a stop with a load of guests and visitors after an aborted takeoff during a preparation flight.

But the crew of Doc, one of the last two Superfortresses still flying, was determined to get Vaucher in the air.

Vaucher was accompanied by Veterans Airlift Command volunteer pilot John Gabriele, Donna Lazartic, and family members as he ascended through a bomb bay stairwell into the navigator’s position on the port side of the fuselage. His eyes sparkled under a shock of grey hair as Vaucher surveyed the reconstructed aircraft that had languished for 42 years in the Mojave Desert before a cadre of volunteers led by Tony Mazzolini swarmed in to save it.

The flight from Manassas brought back memories for the World War II U.S. Army Air Corps pilot who also delivered to the armed forces the first Boeing B–29 when it rolled off the Wichita, Kansas, assembly line in July 1943.

The massive front windscreen provided Vaucher a superb view of rolling terrain near the foothills of the Appalachian Mountains as the 99-foot-long aircraft smoothly rotated and entered a left crosswind. Two large television monitors aft of the bomb bay broadcast an outside view of the flight, a graphical representation of airspace, and the current weather conditions, while the bomber quickly ascended to pattern altitude. The situational awareness was a vast improvement over the instrumentation Vaucher relied on during his years of active service.

Less than favorable weather conditions kept the honor flight short and in the local area.

After the successful flight, which had attracted a crowd to the airfield despite secrecy surrounding the anniversary mission, Vaucher regaled B–29 Doc pilot Steve Zimmerman with a few stories he encountered as a World War II bomber pilot.

Weak brakes, a lack of reversible props, and a nosewheel collapse cut one wartime B–29 mission short. During another, his heavily laden long-range bomber struggled to gain altitude when one of the four supercharged 2,200-horsepower Wright R-3350 Duplex Cyclone engines feathered unexpectedly on takeoff.

“I staggered out” as the 138,000-pound aircraft slowly gained altitude, he recalled to Zimmerman, who had just landed the meticulously restored B–29 Doc on 6,200-foot long Runway 34R. “What happened was that when the co-pilot ganged the power down from our takeoff engine speed of 2,900 rpm to 2,600 rpm or so, one of the toggle switches stuck and an engine went into feather mode. I could barely keep the airspeed up above a stall. Fortunately, we took off at sea level and remained at sea level for the next 10 miles, so I was able to baby the thing up to get going.”

Vaucher later joined the flight crew on the ramp for a postflight photo where he flashed a smile and an enthusiastic thumbs up. Earlier the honorary air boss repeated the advice he dispatched to dozens of warbird pilots who diligently trained and prepared themselves and their machines to overfly the Potomac River, the Lincoln Memorial, and the Mall. He admonished them to “get in line and stay in line,” just as he did at the tip of the spear in Japan more than 75 years ago.

Story credit: https://www.aopa.org/
Photo credit: Retired U.S. Air Force Lt. Col. Bob Vaucher, 101, who flew Boeing B-29 Superfortresses during World War II, joins the B-29 ‘Doc’ crew at Manassas Regional Airport/Harry P. Davis Field after a local flight in the aircraft which was scheduled to take part in the Arsenal of Democracy flyover of Washington, D.C., before it was scrubbed for weather September 26. Photo by David Tulis.