When Things Don’t Go According to Plan

Flying the Shannon Collection-Part III of 3
for VAHS Newsletter, Jan. 2021
by Paul Sullivan

When Things Don’t Go According to Plan 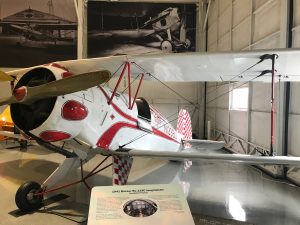 The Buckre Jungmeister was manufactured in Germany in 1941 and was used as a Luftwaffe trainer until the end of hostilities. This original jungmeister, still powered with the Siemans – Halske engine is meant to be a flying tribute to “Bevo” Howard.

An old-time flyer once said: Flying really isn’t that hard when things are going by the book. You earn your pay check when things go off the rails.

Which brings us to the wrap-up of this series, where Mert Meade, Sid Shannon’s pilot for a growing collection of early flying machines in the late 1970s, tells about two of the more challenging experiences he had. Meade wrote up his flying experiences in a series of personal notes he titled, “When Passion was the Fuel.”

In one segment, he flew the museum’s newly acquired Bucker Jungmeister cross-country from New Mexico to Fredericksburg, “just following the highways.” The trip took nine days, chiefly due to weather.

In the second, Meade, a career primary flight instructor, was teaching himself to fly Shannon’s extremely rare, airworthy SPAD VII fighter. Late in World War I, the French-designed SPAD series of fighters was state-of-the-art.

Museum owner Shannon asked Meade to travel to Espanola, N.M., to check out a Jungmeister there, with an eye toward buying it for the museum.

Shannon had long admired the taut little biplane, which he had seen put through its paces by the renowned Beverly “Bevo” Howard at airshows. The owner of the plane was Tom Mayer, a University of New Mexico English professor and author of “Climb for the Evening Star,” an essay on his flight experiences. (This writer hasn’t read it but Meade says it’s a good read.)
All went well, and Mayer flew the single-seater, putting it through its paces for Meade. They agreed on a $30,000 price, and Meade turned his attention to learning to fly the machine…all the way to Virginia from a town north of Santa Fe.

The sole caution from Mayer was that it was an oil burner, and the would use a quart every two hours. At least that’s what Meade thought Mayer said. Looking back, he thinks differently.

All went well the first day out, Meade “following the concrete compass,” (I-40) as he told me for a story I wrote at that time about the Bucker’s arrival in Fredericksburg. On day 2, Meade had just passed the airsport at Shawnee, OK, when the oil pressure dropped from normal to zero-the sort of thing that gets any pilot’s instant attention.

“I snapped the throttle shut, stood the little biplane on it’s wingtip and headed for the airport,” Meade remembers.

Mags off, he managed a decent dead-stick landing at Shawnee. This got plenty of notice from the airstrip’s hangers-on. Especially since it was blazing hot and Meade had to push the plane some distance to the FBO.

“She didn’t burn a quart every two hours; she burned two quarts per hour!” Meade exclaimed. “I learned you can’t be too careful.”

The remainder of the journey was uneventful. Shannon was delighted with his new acquisition and directed that it be painted in the livery of the late Bevo Howard.

Meade and Francis Clore-who is too often overlooked in accounts of the Shannon collection-painstakingly repainted the Bucker to reproduce a likeness to Howard’s aircraft, which is in the National Air and Space Museum.

As part of the Shannon collection, Meade flew the little Bucker many times. It was delight, he remembers.

One day near closing time, he approached the airport and decided to do a mini-demonstration with the Jungmeister. Approaching Shannon’s runway 23 (now 24), he rolled the ship inverted, flew a few seconds, then climbed out and righted the craft, followed by a few basic aerobatic moves.

“Then, still at 2,000 feet, I leveled off and was planning to come down to land when the ship started shaking like nothing I’d ever felt before. I couldn’t read the instruments and the aileron on the right upper mainplane was shaking so badly it was a blur.”

He closed the throttle, eased the nose up a bit to slow down, at the same time reaching for his parachute. “I was planning to leave that ship if the shaking kept up,” he remembers.

Then-as soon as he put a little positive G on the airframe, “she steadied out and was as smooth as glass.” Relaxing that back pressure on the stick, the shaking would start again. That was the pattern, if he could find a way to keep a slight positive load on the plane it was all right; if not, it would shake uncontrollably.

Since he was over the airport and didn’t look forward to leaving the craft by parachute, Meade decided to try to simulate those strange flight load conditions all the way to a safe landing.

He tried gently spiraling down to the left, “I was able to keep just enough G-loading on the ship to keep everything in place,” said Meade.

It worked. And instead of having to deal with (and explain) a pile of pieces of airplane, the Shannon Air Museum today has quite a nice little German pre-war training plane.

Safely on the ground, a close examination of controls on the right side found a small fitting on a strut wire had broken, permitting the upper mainplane to move forward.

Boynton Hagaman made a fitting, to replace the broken part. The plane was flown just one more time before the untimely death of museum founder Sid Shannon. 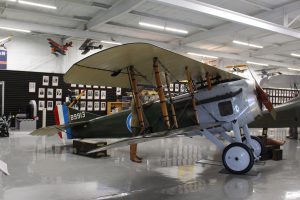 The Spad VII was in the 1927 film, “Wings,” which was the first feature film to win an academy award! The SPAD series was one of the best fighter planes of World War I.

When it came time to fly the SPAD fighter, Meade did his homework first, as might be expected, reading widely about SPADs, generally, and about this particular plane which he described as a beautiful reproduction with many original parts. The museum’s aircraft was was built under license in 1916 by Mann-Egerton coach works in England.

Meade learned that Jack Maas, a former manager of Shannon Airport (and ex-USMC aviator) had flown the SPAD, so he called Col. Maas to ask him what to expect.

“It was pretty obvious from our conversation,” said Meade, “that the SPAD wasn’t Jack’s favorite” airplane to fly. “He gave me a few pointers,” said Meade, “and wished me luck.”

From what he learned, the aircraft had a tendency to make unanticipated hard right turns once it was landed. Meade watched films of this and was certainly aware about the habitual tendency.

Pilots touring the museum today often note the SPAD wing’s unusually sharp leading edge. Meade didn’t want to land that airplane until he found out just how that wing actually would behave in a stall.

In the air, “Everything felt fine and firm until the very thin, curved airfoil decided it was finished flying. It quit flying with a vengeance and pitched over with a lot of authority,” he found.

“She didn’t go off to either side, just pitched straight forward with enough effort to make me glad I was well strapped in,” he continued.

“I relaxed back pressure and immediately came in with the power. That big propellor moved enough air so recovery was no problem at all.”

He followed that with a power-off stall. The recovery was slow and used a lot of altitude, which brought the realization that the altimeter was so inaccurate as to be nearly useless. The airspeed indicator wasn’t much better.

As for landing, the approach was not difficult, he kept the plane at an estimated 70-75 miles per hour (he didn’t trust speed indications, marked in kilometers per hour), touching down in a three-point attitude, keeping the stick back to dig the tailskid into the ground. As it slowed, the SPAD began its pirouette to the right. Meade booted opposite rudder while giving the engine a blip to give the rudder some air to work with. It straightened out and slowed to a stop.

“Over the next three years I flew the SPAD quite a few times; about 13 hours in all,” Meade recalled.

“It wasn’t a favorite of mine,” he said, “but I’m glad I had the opportunity.”