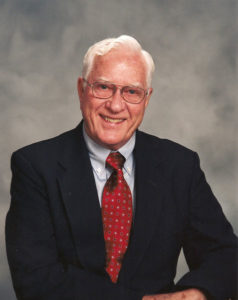 JUNE 17, 1927 – JUNE 28, 2022
We are sad to announce the passing of our friend, Lin Bottoms. After a brief illness, he passed away eleven days after his 95th Birthday. Our condolences to Carol and family. He has many, many friends in the Aviation field and will be sorely missed.

Inducted in 2007, Leonard L. Bottoms, Jr. started flying in 1943, receiving his Private License in 1944. He was an FAA Designated Pilot examiner for nearly 20 years and has served as an FAA safety counselor. He built two homebuilt airplanes, the first a Pitts Special and the second a plane of his own design. That plane, Skeeter, won the Design Award for the Most Outstanding All Wood Aircraft in 1966 at the Rockford, Illinois EAA air show. He was one of the founders of the Central Virginia EAA Chapter 231 and served as its president for 5 years. He managed the New Kent County airport for 6 years, the Corporate Terminal for Aero Industries at Byrd Airport for ten years and until his retirement at age 75 oversaw the daily operations at the Executive Terminal at RIC. He started an aerobatics club in Richmond and flew for Barnstormer’s Airshows at Kings Dominion for its entire existence.

BOTTOMS, Leonard L. “Lin”, Jr., 95, went to be with his Lord on June 28, 2022, after a short illness. He lived life to the fullest, spending his free time flying, boating, golfing, riding his motorcycle and traveling. He is survived by his wife of 43 years, Carol; his four children, Diane Boxley, Connie Matta (Craig), Leonard (Carroll) and Suzanne Wade (Jim); and his seven grandchildren, Brian Matta, Cody Bottoms, Josh Baker, Kyle Baker, Trent Bryan, Chelsea Bryan and Anderson Bryan. He was preceded in death by his parents, Leonard L. Bottoms Sr. and Cora Belle Bottoms; sisters, Virginia Cox, Thelma Throckmorton, Lorraine Fadely; and one brother, Otis Knight. The family will receive friends on Wednesday, July 13, from 2 to 4 and 6 to 8 p.m. at Nelsen Funeral Home, 4650 S. Laburnum Avenue, Richmond, Va. 23231. The funeral service will be held at Four Mile Creek Baptist Church, 2950 New Market Road, Richmond, Va. 23231, on Thursday, July 14, at 2:00 pm. Interment will be in the church cemetery. For condolences and more, please visit www.nelsenrichmond.com.