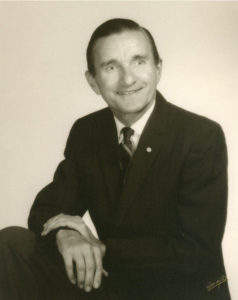 Inducted in 2008, Elmer Durand Bailey began his flying career at Hermitage Airport in 1942. He enrolled in the Civil Pilot Training program flying Piper J-3s, Taylorcrafts, Fairchild PT-19s and Myers OTWs. He completed the instructor course in late 1943. After World War II he started work as a flight instructor at Hermitage Airport and began his long involvement in general aviation in the Commonwealth. He then moved on to a larger flight school, Aeroway, located at Byrd Field.

In 1947 Bailey was hired by Sherrillaire, Inc. as general manager of Northfield Airport. At Northfield Airport, Bailey was chief flight instructor, oversaw the maintenance shop, airport maintenance and hangar rentals and was a full time promoter of aviation. He was an active supporter of the Civil Air Patrol, providing ground support, office space and served as a Captain in the Richmond Squad.

In the 1950s Bailey joined with other aviation leaders to form the Virginia Aviation Trades Association, later to become the Virginia Aviation Business Association. He served as its secretary and two terms as its president. His expertise as a flight instructor led to his appointment as an FAA designated flight examiner. In 1963 Bailey moved into airline airport management when he became deputy director of the Patrick Henry Airport in Newport News, Virginia. In 1975 Bailey took over the top job at the Monroe Municipal Airport in Monroe, LA, where he continued his enthusiastic support of the aviation industry until his retirement in 1985.