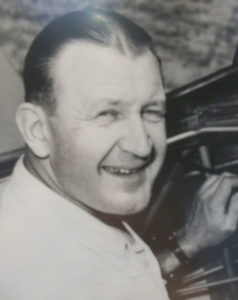 Inducted in 1989, William Robert “Bob” Ashburn started flying in 1925. He worked as a mechanic for the Army Air Forces, Gates flying Circus, Pitcairn Aviation and Luddington Airlines, which was based at the Washington-Hoover Airport in Washington, DC. In 1931, he started Beacon Field in Alexandria, Virginia, where he began a career as a flight instructor. Included among the early students was entertainer Arthur Godfrey who became a lifelong friend. He became the first CAA Flight Examiner for private and commercial pilots in Northern Virginia and was very active in the Virginia Aviation Trades Association. In 1945, he purchased Hybla Valley Airport south of Alexandria, Virginia, where he conducted flight training courses.