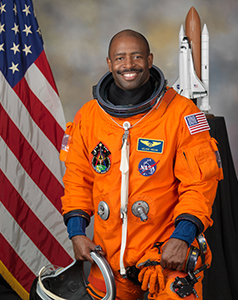 Leland Devon Melvin, whose spectacular college football performances pointed toward a life playing for pro teams, instead found his niche in a life in space with NASA.

In a wide-ranging career featuring two space flights aboard the Space Shuttle providing support for the International Space Station, Melvin gained fame and won acclaim for that and numerous other assignments with the agency.

Melvin, of Lynchburg, attended the University of Richmond on a football scholarship, graduating with a bachelor’s degree in chemistry. Later, after repeated hamstring injuries, he abandoned a pro football career and instead entered graduate school, earning a masters degree in Materials Science Engineering from the University of Virginia in 1991,

He had begun work for NASA in 1989, at the Langley Research Center. Melvin worked on and led many of that agency’s programs including the Vehicle Health Monitoring team for the cooperative effort of NASA and Lockheed Martin for the X-33 Reusable Launch Vehicle, among others.

Melvin was selected for NASA’s astronaut training program in 1998.

He flew two missions on the Space Shuttle, logging more than 565 hours in space on STS-122 and STS-129, both to service the International Space Station.

Melvin later served at the Astronaut Office Space Station Branch and at the agency’s Washington headquarters as co-manager of the Educator Astronaut Program.

He was eventually named associate administrator for NASA’s Office of Education, retiring from the agency in 2014. He continues, however, to give talks on STEM education and his experiences in both his career. The former astronaut has published two books: “An Astronaut’s Story of Grit, Grace and Second Chances,” and “Chasing Space: Young Reader’s Edition.”