NEVER TOO LATE TO HAVE A LITTLE FUN!! by Van Crosby 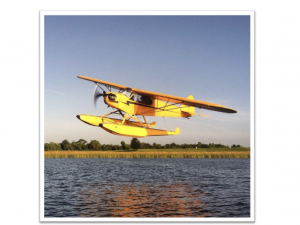 For 40 years as an aviation insurance agent I was blessed to work for a company that supplied me an aircraft for my business travel. Over all those years the aircraft included several Cessna 310’s, Baron 58, Piper Arrow and Cirrus SR22. These aircraft fed my love of flying and the need to travel kept me in the air 2 to 3 times a week. This frequency help keep me current and I enjoyed IFR flying as routine to meet the demands of my business trips.

Now in retirement my flying has dropped off drastically and I haven’t been IMC (instrument meteorology conditions) in over a year! In October I was due for a flight review and my first thought was to get a BFR (bi-annual flight review) and IPC (instrument proficiency check). Then it hit me that with this infrequent flying my days of heavy IFR are behind me. All I really needed was to satisfy the requirement for a flight review and a new pilot rating would take care of everything! Why not add a seaplane rating to my license and check it off my bucket list?

Living in Florida I am only two hours from Winter Haven, home of Jack Brown Seaplane Base. Jack Brown has trained over 22,000 pilots, nearly 70% of the seaplane pilots in the world! The company has been in business since 1963 and operates a fleet of aircraft which includes several Piper J3 Cubs, Super Cub and a Maule all on floats. Today the company is owned and operated by Jack’s grandson-in-law Ben Shipps, who had previously been flying seaplane charters in Alaska. 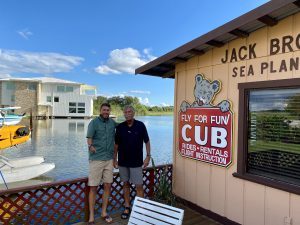 Years ago I had the pleasure of meeting Ben during graduation week at Liberty University. He made a life long impression on me when I reached out to shake his hand. He reached out with the longest of his less than fully developed arms and it was clear that if there was a problem shaking hands it was my problem not his! Ben doesn’t view his birth defects as a handicap that prevents him from achieving any goal he sets, much less shaking hands. When Dave Young told me he was heading to Jack Brown’s to instruct, I decided at that moment that I would seek him out if I ever pursued the rating.

Flying for so many years on business it had been a really long time since I enjoyed the basics of flying that got me hooked in the beginning. It is like slowing down to smell the roses! Almost all the training was done at 500 feet of less, door and window open on the J3 and speeds that really allowed you to take in the scenery. (amazing how much more vibrant the view is when you are not looking through plexiglass) With the training all about takeoffs and landings, reading the wind and the water and taxiing, we spent each lesson lake hopping and the choices are endless in Florida. IT WAS ABSOLUTELY THE MOST FUN FLYING I HAVE DONE IN YEARS!

It is Ben Shipps exceptional view on life and his Virginia connection at Liberty University that prompted me to write this article. I would encourage anyone looking for a fun time while experiencing a truly unique side of flying to check out Jack Brown’s Seaplane Base. It has a real family atmosphere and you will get to fly with Ben, he is the FAA designated flight examiner who will give you your check ride!

See below for YOUTUBE.COM BEN SHIPPS: FLYING THROUGH ADVERSITY – great video on Ben