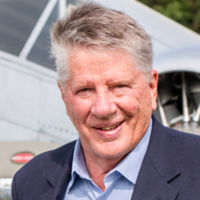 Karl was born September 15, 1940, in Parkesburg, PA to the late Christian David and Irma Hess Stoltzfus. Karl’s father, known as “Airplane Chris,” was an aviation pioneer, and he instilled into Karl a love for that world. Even at a young age, Karl developed a deep desire to operate a large fleet of aircraft. After graduating high school, Karl began working at his father’s aviation business as a pilot and fabricator. On August 3, 1963, he married the love of his life, a young nurse named Barbara Sue Beiler, who survives. In 1967, he and his twin brother, Ken, took their families and moved to the Shenandoah Valley to attend Eastern Mennonite College, from which he graduated with a Bachelor’s degree in Business. To pay their way through school, Karl and Ken founded K & K Aircraft. Seven years later Karl and Barbara purchased Bridgewater Air Park, and K & K relocated there. This business has become Dynamic Aviation, an aviation business that has thrived under Karl’s hand for over 50 years.

As an avid pilot, Karl was passionate for all things aviation. His depth of knowledge regarding aircraft parts, maintenance, and modifications was unparalleled. He bought and sold many aircraft throughout the years, including the purchase of 124 King Air 90 aircraft from the army in 1996. In 2016, Karl purchased the First Air Force One and has led the restoration since. He was a voracious reader of both aviation and history, and loved to share what he learned with everyone he met. Karl demonstrated integrity and honesty. He taught people to do the right thing and do it well. He taught them how to laugh, how to learn, and how to begin everything with a “yes.” Additionally, he had a distinct honesty and clear passion for Jesus that affected everyone with whom he interacted. He also had a special love for his grandchildren. He put them first and had a meaningful relationship with each one of them, both encouraging them to pursue their dreams and deepen their relationships with Christ. His compassion and selflessness extended past the familial bounds to all those he came in contact with, and because of this, many people came to call him brother, father, or friend. He was also a member of First Presbyterian Church of Harrisonburg, VA.

Karl was strong to the end. In late October he entered the hospital with severe pancreatitis, where he spent six weeks before passing away peacefully into the arms of the Lord on the night of November 27th.

Karl is survived by his wife, Barbara Beiler Stoltzfus, and his children Karl Stoltzfus Jr, Michelle (Rod) Moyer, and Michael (Melissa) Stoltzfus. Also surviving are his seven grandchildren: Logan, Dalton, and Karly (children of Karl Jr), Cristiana and Katie (children of Michelle), and Gabriel and Lucas (children of Michael). Karl is also survived by his older sister Ruth Ann (Richard) Glick of White River Junction, VT, his twin brother Ken (Elaine) Stoltzfus of Kidron, OH, and younger sister Lin (Ron) Mease of Elizabethtown, PA. They cherish his memory and appreciate all your prayers and condolences.

A private graveside service will be held for Karl. Sadly, because of COVID-19 restrictions, we are unable to invite all the people that we would love to. At a future date there will be a time of public remembrance for our husband, father, grandfather, and friend Karl Stoltzfus, Sr., which will be open to anyone who wishes to attend.